Time to cut almost all meat from your diet, scientists say 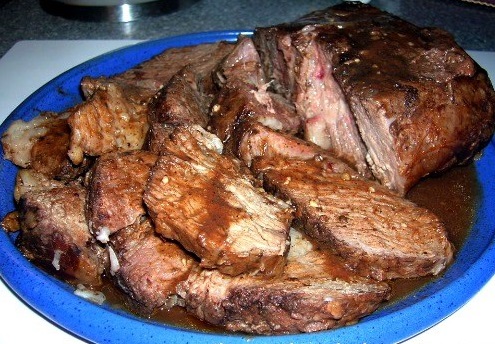 Time to cut almost all meat from your diet, scientists say
Shares

An international team of scientists has developed a diet it says can improve health while ensuring sustainable food production to reduce further damage to the planet.

The "planetary health diet" is based on cutting red meat and sugar consumption in half and upping intake of fruits, vegetables and nuts.

And it can prevent up to 11.6 million premature deaths without harming the planet, says the report published Wednesday in the medical journal The Lancet.

The world's population is set to reach 10 billion people by 2050; that growth, plus our current diet and food production habits, will "exacerbate risks to people and planet," according to the authors.

"The stakes are very high," Dr. Richard Horton, editor in chief at The Lancet, said of the report's findings, noting that 1 billion people live in hunger and 2 billion people eat too much of the wrong foods.

Horton believes that "nutrition has still failed to get the kind of political attention that is given to diseases such as AIDS, tuberculosis, malaria."
"Using best available evidence" of controlled feeding studies, randomized trials and large cohort studies, the authors came up with a new recommendation, explained Dr. Walter Willett, lead author of the paper and a professor of epidemiology and nutrition at the Harvard T.H. Chan school of public health.

The report suggests five strategies to ensure people can change their diets and not harm the planet in doing so: incentivizing people to eat healthier, shifting global production toward varied crops, intensifying agriculture sustainably, stricter rules around the governing of oceans and lands, and reducing food waste.
The 'planetary health diet'

To enable a healthy global population, the team of scientists created a global reference diet, that they call the "planetary health diet," which is an ideal daily meal plan for people over the age of 2, that they believe will help reduce chronic diseases such as coronary heart disease, stroke and diabetes, as well as environmental degradation.

They recognize the difficulty of the task, which will need "substantial" dietary shifts on a global level, needing the consumption of foods such as red meat and sugar to decrease by more than 50%. In turn, consumption of nuts, fruits, vegetables, and legumes must increase more than two-fold, the report says.

The diet advises people consume 2,500 calories per day, which is slightly more than what people are eating today, said Willett. People should eat a "variety of plant-based foods, low amounts of animal-based foods, unsaturated rather than saturated fats, and few refined grains, highly processed foods and added sugars," he said.

"Almost all of the regions in the world are exceeding quite substantially" the recommended levels of red meat, Willett said.

The health and environmental benefits of dietary changes like these are known, "but, until now, the challenge of attaining healthy diets from a sustainable food system has been hampered by a lack of science-based guidelines, said Howard Frumkin, Head of UK biomedical research charity The Wellcome Trust's Our Planet Our Health program. The Wellcome Trust funded the research.

"It provides governments, producers and individuals with an evidence-based starting point to work together to transform our food systems and cultures," he said.

If the new diet were adopted globally, 10.9 to 11.6 million premature deaths could be avoided every year -- equating to 19% to 23.6% of adult deaths. A reduction in sodium and an increase in whole grains, nuts, vegetables and fruits contributed the most to the prevention of deaths, according to one of the report's models.
Making it happen

Some scientists are skeptical of whether shifting the global population to this diet can be achieved. 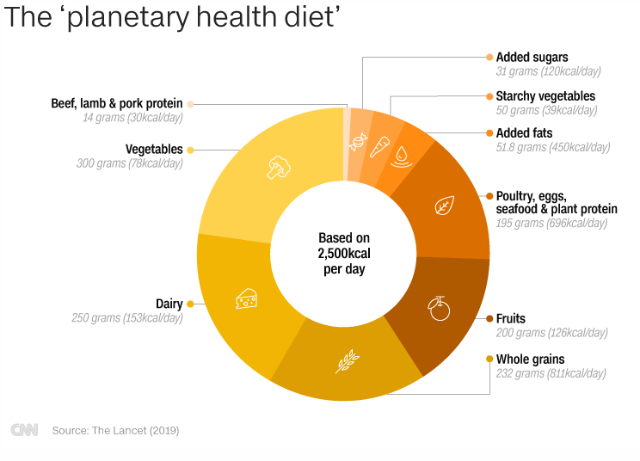 The recommended diet "is quite a shock," in terms of how feasible it is and how it should be implemented, said Alan Dangour, professor in food and nutrition for global health at the London School of Hygiene and Tropical Medicine. What "immediately makes implementation quite difficult" is the fact that cross-government departments need to work together, he said. Dangour was not involved in the report.

At the current level of food production, the reference diet is not achievable, said Modi Mwatsama, senior science lead (food systems, nutrition and health) at the Wellcome Trust. Some countries are not able to grow enough food because they could be, for example, lacking resilient crops, while in other countries, unhealthy foods are heavily promoted, she said. 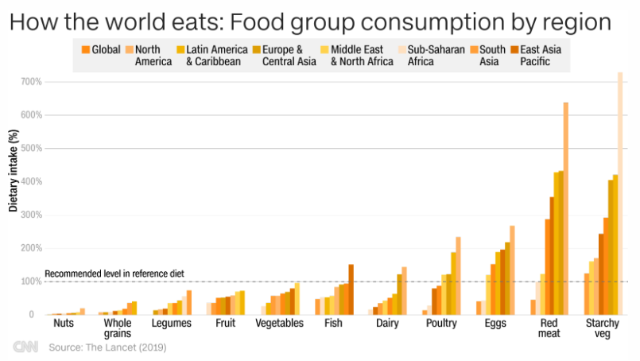 Mwatsama added that unless there are structural changes, such as subsidies that move away from meat production, and environmental changes, such as limits on how much fertilizer can be used, "we won't see people meeting this target."

To enable populations to follow the reference diet, the report suggests five strategies, of which subsidies are one option. These fit under a recommendation to ensure good governance of land and ocean systems, for example by prohibiting land clearing and removing subsidies to world fisheries, as they lead to over-capacity of the global fishing fleet.

Second, the report further outlines strategies such as incentivizing farmers to shift food production away from large quantities of a few crops to diverse production of nutritious crops.

Healthy food must also be made more accessible, for example low-income groups should be helped with social protections to avoid continued poor nutrition, the authors suggest, and people encouraged to eat healthily through information campaigns.

A fourth strategy suggests that when agriculture is intensified it must take local conditions into account to ensure the best agricultural practices for a region, in turn producing the best crops.
Finally, the team suggests reducing food waste by improving harvest planning and market access in low and middle-income countries, while improving shopping habits of consumers in high-income countries.

Louise Manning, professor of agri-food and supply chain resilience at the Royal Agricultural University, said meeting the food waste reduction target is a "very difficult thing to achieve" because it would require government, communities and individual households to come together.

However, "it can be done," said Manning, who was not involved in the report, noting the rollback in plastic usage in countries such as the UK.
The planet's health

The 2015 Paris Climate Agreement aimed to limit global warming to 2 degrees Celsius above pre-industrial levels. Meeting this goal is no longer only about de-carbonizing energy systems by reducing fossil fuels, it's also about a food transition, said Johan Rockström, professor of environmental science at the Stockholm Resilience Centre, Stockholm University, in Sweden, who co-led the study.

"This is urgent," he said. Without global adaptation of the reference diet, the world "will not succeed with the Paris Climate Agreement."

A sustainable food production system requires non-greenhouse gas emissions such as methane and nitrous oxide to be limited, but methane is produced during digestion of livestock while nitrous oxides are released from croplands and pastures. But the authors believe these emissions are unavoidable to provide healthy food for 10 billion people. They highlight that decarbonisation of the world's energy system must progress faster than anticipated, to accommodate this.

Designing sustainable food systems that can deliver healthy diets for a growing and wealthier world population presents a formidable challenge. Nothing less than a new global agricultural revolution," said Rockström, adding that "the solutions do exist.