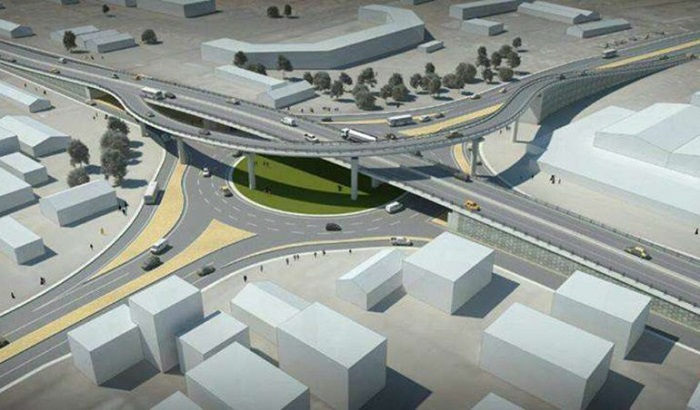 President Akufo-Addo says the New Patriotic Party (NPP) has made history in their first term of office.

Akufo-Addo says under his tenure, five interchanges are being constructed simultaneously across the country.

Commissioning the first phase of the Obestebi Lamptey Interchange as part of his two-day campaign tour of the Greater Accra Region, President Akufo-Addo outlined the interchanges that are currently under construction in the country.

READ ALSO: We did nothing wrong by publishing full voters’ register on website - EC

He charged Ghanaians to extend his mandate, so he can continue to do more of the good works he has started.

“Completion of phase 1 of the Obetsebi Lamptey interchange shows the seriousness that my government attaches towards reducing the congestion in some of the major cities within the country.”

“This is the first time in the history of this country, that more than 5 interchanges are being constructed in the first-term administration. If there are any more reasons to give Nana and Akufo-Addo four more years to do more, this is one of them,” he added.

President Akufo-Addo commissions the Obetsebi Lamptey Interchange as part of activities for his two-day campaign tour of the Greater Accra Region.

About the Obetsebi Lamptey interchange
The three-tier interchange is a key intersection in the arterial road network in Accra. It is aimed at helping to reduce congestion being experienced by commuters on the stretch.

The project commenced in October 2019 with a sod-cutting ceremony for completion in 18 calendar months.

According to the Ministry of Roads and Highways, the works have been completed 5 months ahead of schedule.

Below is the breakdown of the phases of the project according to the Roads Ministry:

Phase I involved the construction of a 550m viaduct and ramps between Graphic Road and Dr. Busia Highway (Kaneshie Mallam Road).

Under the project, a 2 No. (5.5 x 2)m box culvert across the Graphic Road and storm drain of similar size was constructed up to the Ring Road West Carriageway.

This storm drain shall be continued up to Mpamprom Junction under Phase II of the project.

The storm drainage system is to help address the flooding challenges being experienced at Obetsebi Lamptey.

Also, under Phase II, the 3rd tier of the interchange which would be on the Ring Road West (Awudome to Central Mosque at Abbosey Okai) will be constructed.

Additionally, the following road works shall be undertaken;

Widening of the Ring Road West (from Awudome Junction to Obetsebi Lamptey Interchange) into a 2 x 3 dual carriageway.
Improvement of the Awudome Road & Nii Teiko Din Street.
Phase I was executed by Messrs QGMI Construcciones E Infraestructuras Globales S.L.U with Messrs FAS Consult Ltd as the Engineer’s Representative. The Department of Urban Roads was the agency under MRH responsible for the project.

Phase II according to the Ministry will commence immediately.

Funding for this project, amounting to $135 million, was secured by the Akufo-Addo government and made possible by Export Credit Facilities from the United Kingdom and Spain.