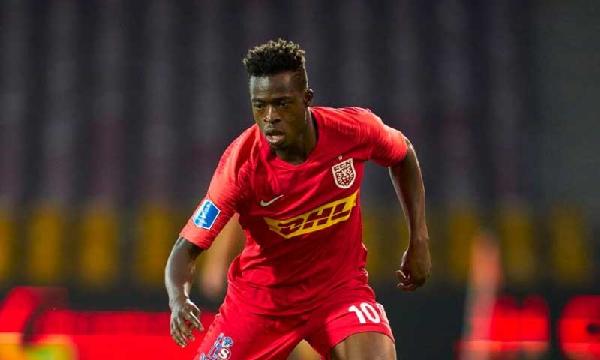 Ghana andÂ Â FC NordsjÃ¦lland winger Kamaldeen Sulemana is on the verge of completing a move to Ajax Amsterdam.

The teenager who has caught the eyes of many European teams including Bayer Leverkusen, Manchester United and Liverpool is set to join the Amsterdam club after an agreement has been reached.

According to reports in the German media, the winger parent club, FC NordsjÃ¦lland has reached an agreement with the Eredivise side to fork out â‚¬15m + add ons for their player.

Meanwhile, Sulemana this week confirmed that Ajax has made an offer for his services.

"I know that Ajax has made an offer," he said. "That's all I can say about it, I can't go into details.

"But an offer has been made," he added.

Should the final details be finalized and the deal announced, KamaldeenÂ Sulemana would be joining compatriotÂ Kudus Mohammed, who also joined Ajax from FC Nordsjaelland last summer.Â

Sulemana has been on a good form, scoring ten goals and eight assists in thirty games in the Danish League.

He has been named in Ghana's squad for the upcoming friendlies against Morocco and Ivory Coast.