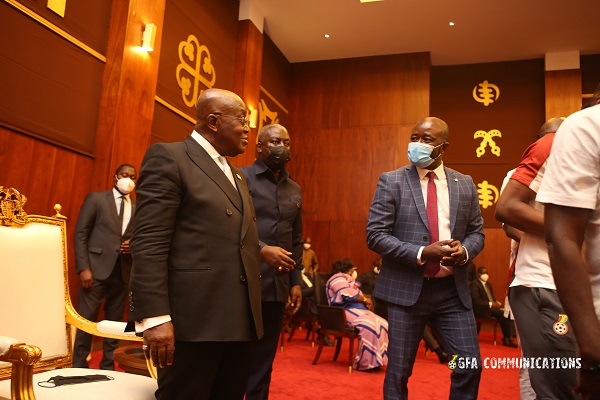 President Akufo-Addo wants the Black Stars to be the first African country to reach the semi-finals of the FIFA World Cup in 2022.

But before the Black Stars would be hoping to meet the target they first have to qualify for the tournament to be staged in Qatar.

The Black Stars' best-placed finish at the World Cup was in 2010 when they reached the quarter-final, being eliminated by Uruguay on penalties.

“We must also reach at least the semi-finals of the world cup in Qatar. Our exploits in 2010, where we reached the quarter finals in South Africa, tell us that once prepared, we have the quality and the talent to match any of the best teams in the world," the Akufo-Addo said.

He believes with the quality materials the nation is blessed with, the target can be achieved if they put their mind to it.

“The task might seem daunting, but it is exactly not insurmountable,” he added.

Ghana has been placed in Group G alongside South Africa, Zimbabwe and Ethiopia in Group G for the second round of the World Cup qualifiers.

Qualification for the World Cup will start in June. The third round will see the 10 group winners from the second round drawn into five home-and-away ties. The winners of each tie will advance to the tournament.

Ghana failed to qualify for the last edition in Russia 2018.

Meanwhile, Minister for Youth and Sports, Mustapha Ussif has revealed that the Black Stars will need $25 million for the upcoming 2022 Africa Cup of Nations and World Cup campaigns.