Algeria earn away win against Cameroon in World Cup playoff 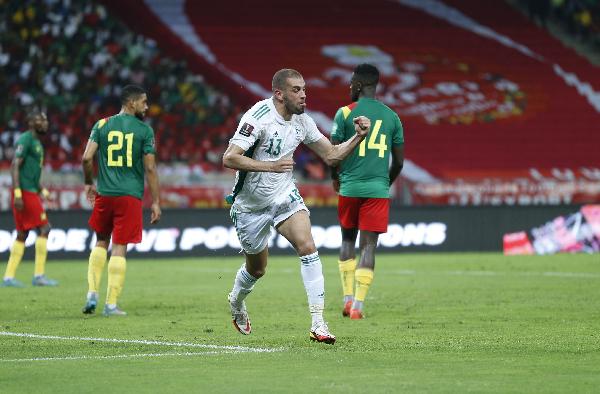 Algeria inflicted a rare home defeat on Cameroon as the 2019 African champions took a crucial 1-0 lead from the first leg of their 2022 World Cup playoff.

The Desert Foxes - bidding to reach a fifth World Cup - host Cameroon, who have been to more World Cups (seven) than any other African side, in the return leg on Tuesday.

The Algerians, whose 35-match unbeaten run ended at recent Africa Cup of Nations in Cameroon, resumed their form heading into that tournament when showing steely resolve to keep the hosts at bay.

Fifty thousand supporters had packed the Japoma stadium, where Algeria had lost two matches and drawn one in their disappointing Nations Cup display.

"We don't care about Japoma stadium," Manchester City's Riyad Mahrez had said upon arrival in Cameroon, seeking to dispel any doubts about the venue.

It seemed in the opening minutes that Cameroon would blitz their way to a comfortable victory, as Belmadi lined up a 5-2-3 for the first time since he took charge in 2018.

The match was significantly delayed in the second half with multiple substitutions and then a partial power outage which affected some of the stadium's lighting projectors.

On the pitch, the hosts suffered from a similar lack of illumination until the closing stages when Karl Toko Ekambi and substitute Leandré Tawamba prompted scares in the Algerian defence.

The Algerians have not lost a home match at Stade Mustapha Tchaker stadium in Blida since they started playing at the arena in 2004, a run that spans over 40 matches.

The victor in four days' time will take one of Africa five Qatar 2022 slots, all of which will be decided on Tuesday.