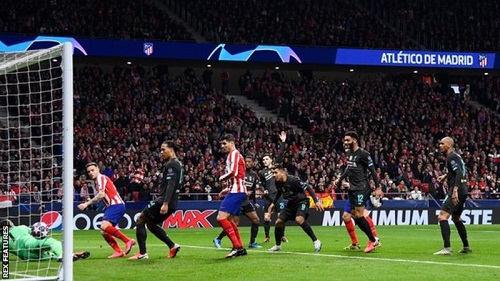 Atletico have never lost a match in which Saul Niguez has scored - played 37, won 33, drawn 4
Shares

Liverpool's defence of their Champions League title hangs in the balance after Saul Niguez's early strike gave Atletico Madrid an aggregate lead going into the second leg at Anfield.

The Reds were given a dose of their own medicine as Atletico harried and hassled throughout and limited them to just two clear chances.

Klopp replaced Sadio Mane and Salah with Divock Origi and Alex Oxlade-Chamberlain but neither made an impact.

Two-time finalists Atletico, who have been on a poor run of form, held on to a fourth-minute lead given to them by Saul. The Spanish midfielder turned sharply to fire home after a corner came off the boot of Fabinho.

The return leg is on Wednesday, 11 March.

Elsewhere, Erling Braut Haaland continued his remarkable scoring form this season with two more goals to give Borussia Dortmund the advantage over Paris St-Germain in their Champions League last-16 tie.

The 18-year-old Norwegian showed two distinct sides of his impressive game with his two second-half strikes - the first a predatory finish after Raphael Guerreiro's shot was blocked and the second a thunderbolt from 25 yards.

They took his tally for the season to a stunning 39 goals in only 29 appearances, and 11 in seven since joining Dortmund in January.

In between the two Haaland goals, Neymar briefly drew the visitors level, slotting in a low Kylian Mbappe cross on his return following four matches out with a rib injury.

But he was outshone by Haaland, who gave the German side the result their positive display deserved and a narrow lead to take to Paris for the second leg on Wednesday 11 March.