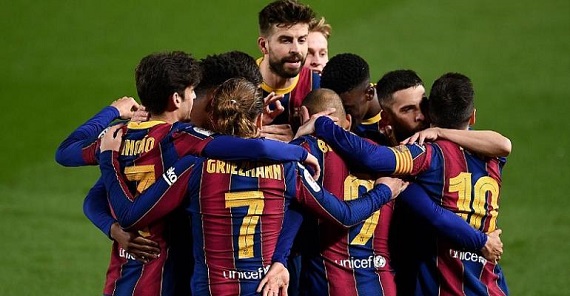 Barcelona pulled off a remarkable turnaround, overturning a 2-0 first-leg deficit to beat Sevilla 3-2 on aggregate and secure their place in the Copa del Rey final.

Ronald Koeman’s side had work to do after losing at the Ramon Sanchez Pizjuan last month, but kept going as Gerard Pique scored a late equaliser in the final minute of stoppage time and Martin Braithwaite netted the winner in extra time.

It took Barcelona just 12 minutes to gain a foothold in the contest through an opener, with Dembele lashing an astonishing strike from distance into the top corner giving Tomas Vaclik no chance.

Antoine Griezmann was introduced off the bench as the home team looked for a second goal, but it was Sevilla who were presented with a golden opportunity to essentially secure their place in the final, but Lucas Ocampos had a penalty kick saved by Marc-Andre ter Stegen.

Barca piled forward in an attempt to send the tie into extra time and found the goal they needed in the final minute of stoppage time when Pique glanced home a header from a Griezmann delivery.

Fernando was sent off in a further blow to Sevilla before Braithwaite got on the end of a Jordi Alba cross to score what proved to be the winner, squeezing his header under Vaclik. The visitors finished the match with nine men, with Luu de Jong sent off as Barca progressed to the final where they will face either Athletic Club or Levante.