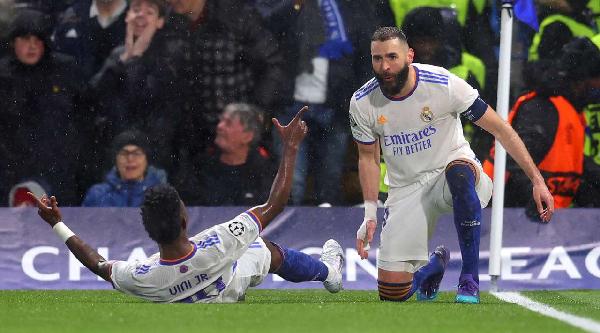 Karim Benzema scored a second consecutive Champions League hat-trick as Real Madrid stunned holders Chelsea to take a 3-1 lead in the first leg of their quarter-final at Stamford Bridge.

The Frenchman followed up his tie-winning heroics against Paris Saint-Germain in the previous round with another devastating contribution to leave the Blues on the brink ahead of next week’s trip to the Bernabeu.

Benzema set the tone when he powered home a pair of technically brilliant headers in three first-half minutes to put the Spaniard’s firmly in control.

A shell-shocked Chelsea eventually responded just before the interval through a Kai Havertz header but they were left with a mountain to climb within seconds of the restart.

A howler from Edouard Mendy presented Benzema with a present and he duly rolled into an empty net to gobble up a treble and restore the away side’s two-goal cushion.

Substitute Romelu Lukaku blew a big chance for Thomas Tuchel’s side to reduce the arrears and the let off allowed the La Liga leaders to come through an intense finale unscathed.

Real will now host Getafe on Saturday prior to welcoming the Blues to the Bernabeu for the second leg on Tuesday evening. Chelsea visit Southampton.