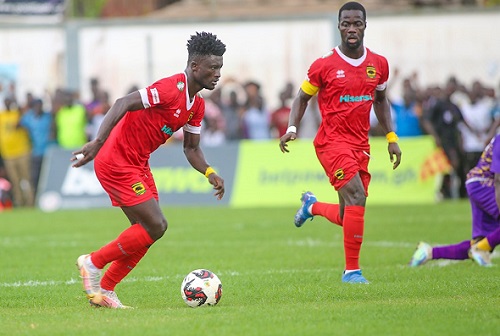 Asante Kotoko were spectacular on Saturday as Nicholas Mensah scored to help the defending champions to a 1-0 win over Medeama SC at the Akoon Park at Tarkwa.

The 19-year picked a pass from Augustine Agyapong, went pass Medeama left back Nafiu Sulemana before firing from a tight angle to beat Boris Mandjui in post for the Tarkwa lads.

The Champions were reduced to 10-men in the 87 minute but that did not deter them from securing their second win on the spin against the mauve and yellows at the Akoon Park. Second half substitute Eric Serge-Zeze was sent off in the 87 minute after a second bookable offense.

The win gives Asante Kotoko their fourth win in six matches to go 13 points and top of the League log.

Bibiani Gold Stars were big winners on Matchday six as they made a trip to Sameraboi to silence Samartex 3-0. Yahaya Abdul Rahman pout Gold Stars in front after 13 minutes before Laar Ibrahim doubled their lead in the 67 minute. Ten minutes from time, Yahaya Rahman scored yet again to make it 3-0 for Gold Stars and also put the game to bed.

Accra Lions defied odds to beat Bechem United 1-0 at the Fosu Gyeabuor Park on Sunday. Frederick Asante scored the only goal of the match in the 44 minute as he connected a Hagan Frimpong pass to slot home – handing them their second away win of the season. Accra Lions now sit in third place with 12 points – one point adrift of leaders Asante Kotoko.

Stephen Dankwa Badu scored in the 13 minute as Real Tamale United handed Aduana FC their defeat of the season at the Aliu Mahama stadium. The defender got on the end of a rebound before drilling home the match winner. The win gives the Tamale lads their first back-to-back wins of the season following 2-1 win over Berekum Chelsea last weekend. They now sit in 10 place with 8 points.

Meanwhile Accra Hearts of Oak shared the spoils with Karela United Football Club in a pulsating 0-0 draw at the Accra Sports stadium. The phobians went inti the match with an aim to extend their winning run to three, but Karela United were too good to break down as they stopped Hearts of Oak in their tracks on Sunday.

On Friday, Legon Cities scored in either half as they beat Accra Great Olympics 2-0 to record their first home win of the 2022/23 betPawa Premier League. Jonah Attuquaye opened the scoring for Legon Cities after connecting from the spot in the 41 minute mark. The referee pointed to spot after Razak Kasim tripped Alex Aso in the box in a goal mouth melee that resulted in a penalty. Legon Cities put the game to bed 10 minutes later as Sulemana Mohammed pounced on a loose ball from a long throw in to drill home for the Royals.

King Faisal were sixth time lucky as they rallied to beat Kotoku Royals 2-1 to record their first win in the betPawa Premier League . Goals from Adom Antwi and Abednego Tetteh helped the Inshallah Boys to grab all the spoils at the Baba Yara Sports stadium. Adom Antwi put the hosts ahead in the 27th minute as Abednego Tetteh extended the advantage in the second half before Emmanuel Marfo pulled one back for Kotoku Royals.

Finally, four goals were produced at the Aliu Mahama stadium in Tamale as Berekum Chelsea scored late to pick a a point against Tamale City in a pulsating 2-2 draw. 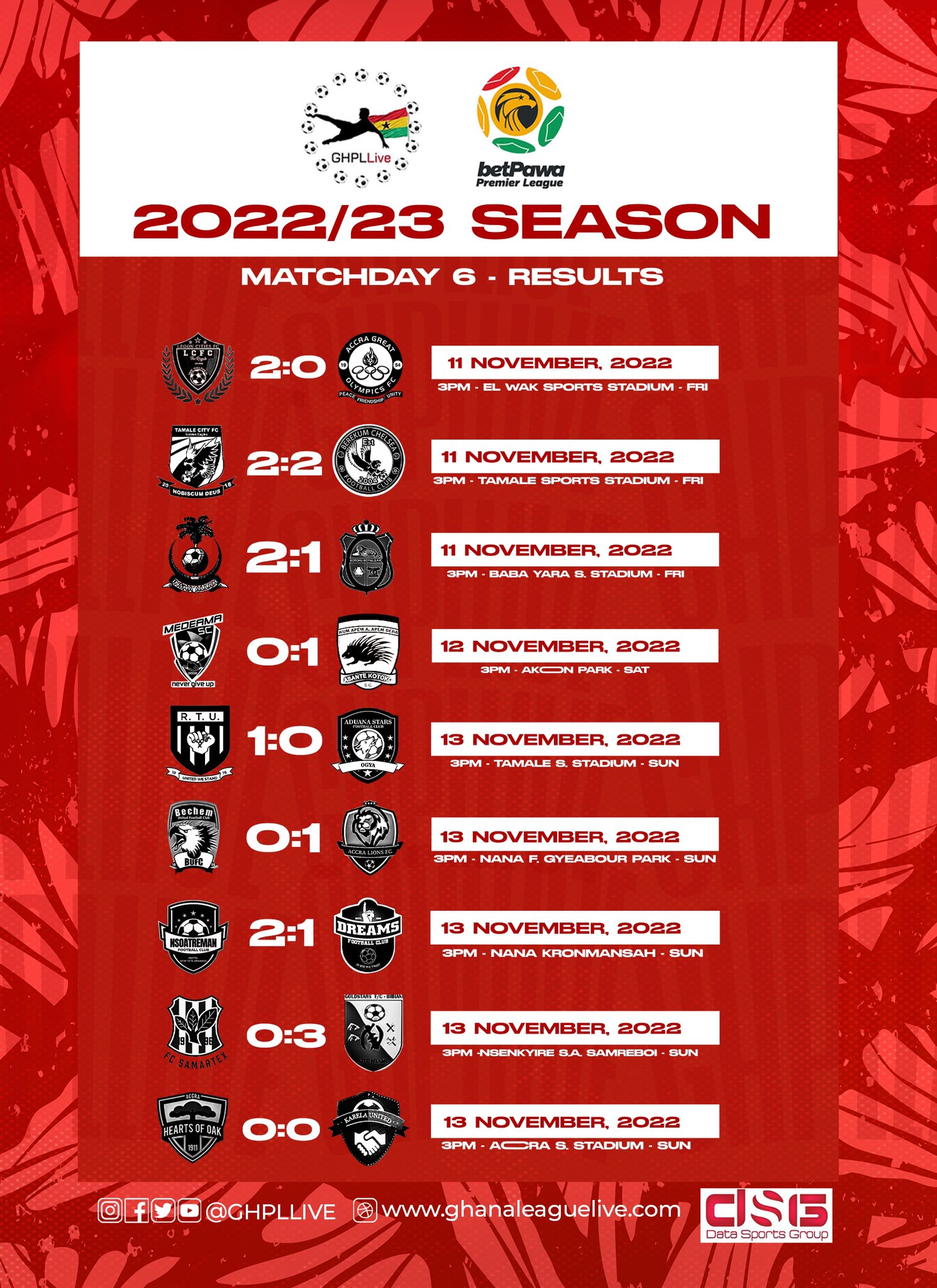 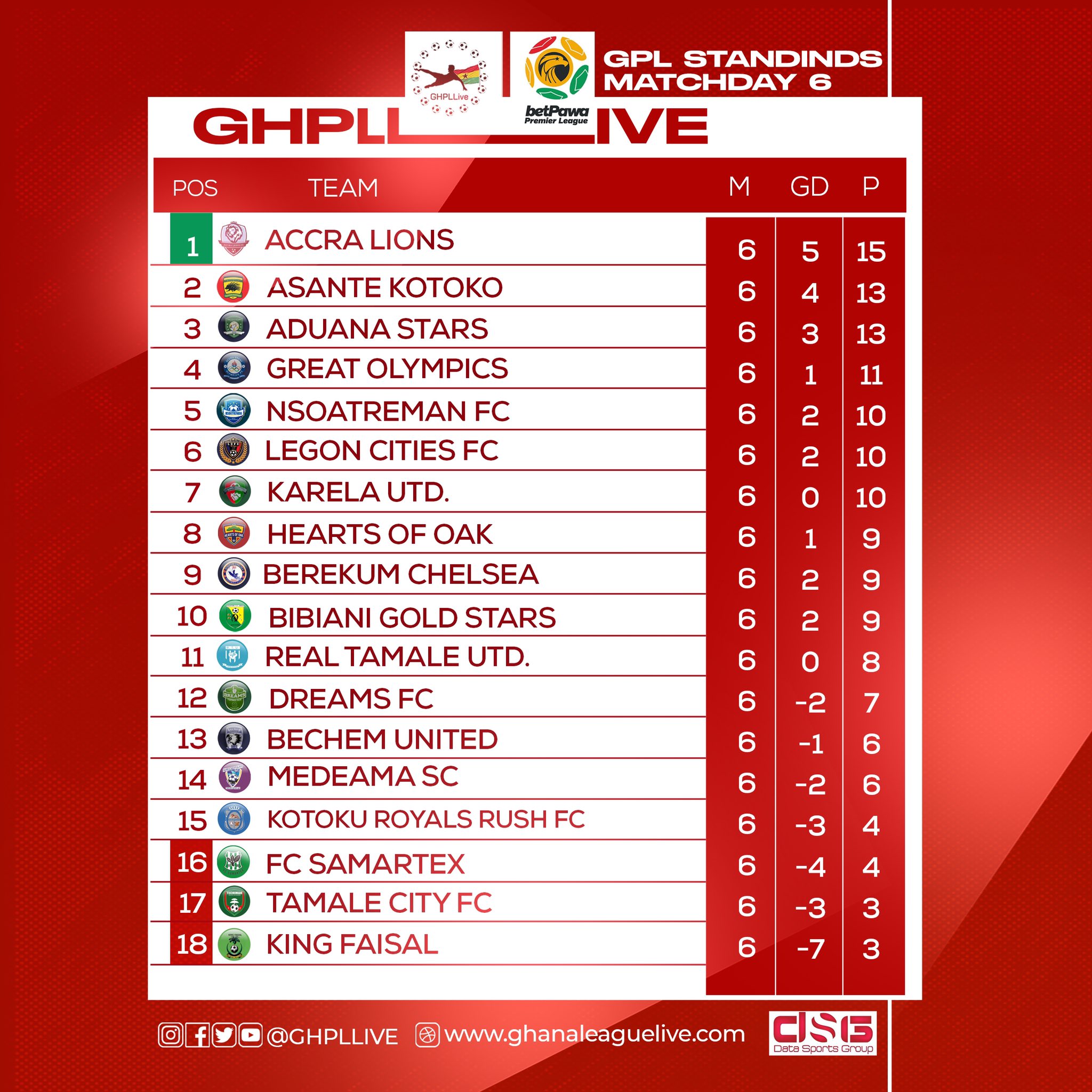