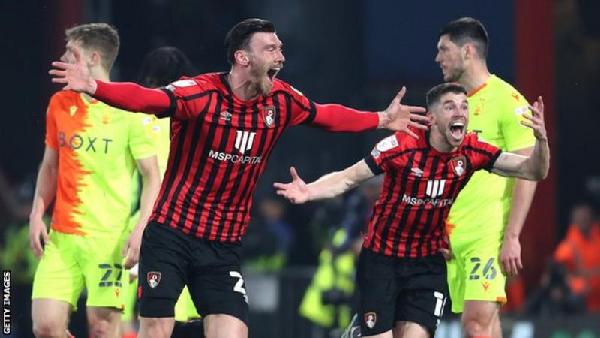 Kieffer Moore sent Bournemouth back to the Premier League with a late winner against Nottingham Forest that sealed automatic promotion from the Championship.

Substitute Moore's cool finish, after a low free-kick found him unmarked in the box, leaves third-placed Forest needing to go through the play-offs if they are to join the Cherries in the top flight next season.

Moore, a January arrival from Cardiff who has managed to make just three substitute appearances because of injury, was smothered by jubilant team-mates as they knew a win against their closest challengers would end a two-year top-flight absence.

They return to the Premier League under manager Scott Parker, who celebrates his second promotion in three campaigns, having taken Fulham up in 2019-20 before leaving the west London club for Bournemouth following relegation last season.

The showdown between second and third in the Championship, while lacking the hype and pageantry of a play-off final, felt every bit the high-stakes encounter that makes the Wembley showpiece the richest game in club football.

In an absorbing and tense first half, Forest striker Sam Surridge hit the crossbar and had a strong penalty appeal ignored after an incorrect offside flag against him.

The forward was brought down by goalkeeper Mark Travers as he tried to round him, but the foul was waved away as the flag was already up.

After the match, Forest boss Steve Cooper told BBC Radio Nottingham that referee Stuart Attwell and his assistant apologised for the mistake.

"They have put their hands up and owned up to a huge error," he said. "It doesn't really help but at least they had the courtesy to own up to the decision that they made."

The visitors created little in a second half dominated by the Cherries, with Dominic Solanke hitting the side netting while Philip Billing and Jaidon Anthony tested Reds goalkeeper Brice Samba.

When Jordan Zemura was brought down on the edge of the area, Billing appeared to be ready to go directly for goal.

Instead, he spotted Moore free in box to sweep home a goal that propelled the hosts back to the Premier League and sparked a party atmosphere at the Vitality Stadium, which saw ecstatic home fans spill onto the pitch at full-time.

Bournemouth, who are now six points clear of Forest, have spent just one of the past 32 weeks outside the automatic promotion spots.

In stark contrast, Forest spent 46 of the first 52 days of the season in the relegation places after making their worst start to a campaign for more than a century.

Since Cooper's appointment as Chris Hughton's replacement in September, no side has collected more points than the Reds as they have mounted what would once have seemed to be a preposterous bid to challenge for promotion back to the Premier League after 23 years away.

When Forest beat Huddersfield on 18 September for their first win - a victory secured under caretaker Steven Reid - the East Midlands club were bottom of the table and 14 points adrift of then leaders Bournemouth.

Forest started the night knowing victory would take them above the hosts on goal difference and into pole position to claim the last remaining automatic promotion place with one game to go.

After Billing tested Samba with an awkward curled shot, it was former Cherries striker Surridge who took centre stage, crashing a powerful shot off the crossbar before the controversial offside decision.

Bournemouth emerged re-energised after the interval, afforded Forest little space or time to play the free-flowing attacking football that saw them win nine of their previous 10 games, and created the better chances before Moore buried his with a fine first-time finish beyond Samba with seven minutes remaining.

Forest finish the season with a trip to Hull on Saturday, knowing victory would guarantee them third place, while Bournemouth host Millwall who are hoping to sneak into the play-offs themselves.