Boxing : Wilder goes 'wild' as he knocks out Breazeale in first round (VIDEO) 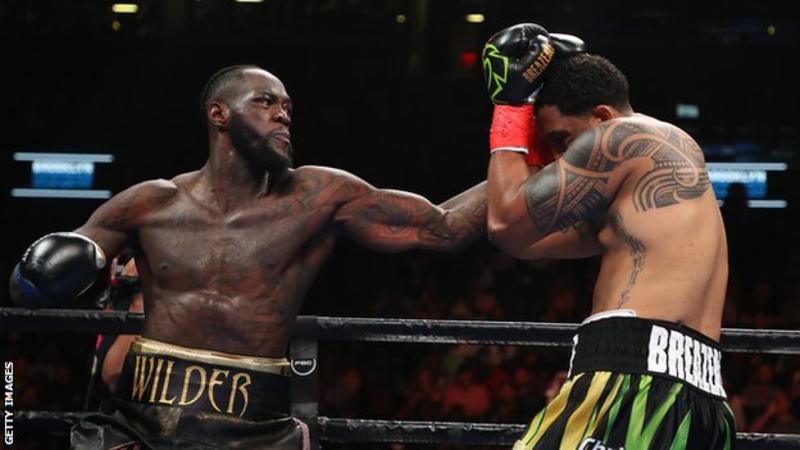 Wilder, 33, flattened his fellow American with 43 seconds of the opening round left - taking his record to 41 wins and a draw from 42 bouts.

Breazeale was on the ropes early on before finding a solid shot to respond to the champion.

But Wilder finished the fight moments later with a huge right hand.

After his victory, Wilder was approached by Cuba's Luis Ortiz in the ring - a man he beat in 2018 - but when asked about potential contests with British heavyweights Tyson Fury and Anthony Joshua, said "no doors are closed" and that such fights "are in discussion".

"All parties involved are talking," Wilder told Showtime. "There's too many people and opinions involved. It will take our teams to sit down, handle things, squash everything and get it done for the fans.

"The big fights will happen the way we all benefit. We risk our lives in here, so let us get our time to iron out our differences and you guys will know when it happens."

Breazeale, 33, left the ring without talking to the media, fresh from a punch that left him sprawled on the canvas and unable to answer the count.

His counter-punch when cornered had briefly seen Wilder engage in a couple of grapples but - after a pause for breath - the champion followed a left-hand jab with a right to the jaw which was as accurate as it was destructive.

It was a 40th victory by knockout for Wilder and just a second career loss for Breazeale, following his 2016 defeat by Anthony Joshua.