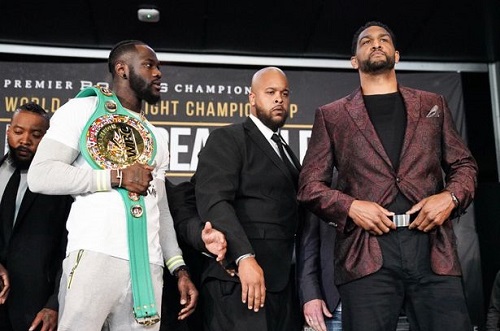 Deontay Wilder has doubled down on his death threat to Dominic Breazeale by offering to pay for his funeral.

Wilder said earlier this week that he has the legal right to kill a man by virtue of being a professional boxer.

He added that he wants a "body on his record" ahead of his heavyweight world title defence against his fellow American.

And when asked on Thursday if he would pay for Breazeale's funeral, Wilder said: "That’s the least I can do, I can pay for the funeral."

The champion has been widely condemned for his crash comments and could be sanctioned by the WBC.

The sanctioning body's president Mauricio Sulaiman revealed the threats will be discussed at a later date.

He said: "I have known Wilder for a long time and he is not the person he portrays in such comments.

"His metaphors are against the WBC code of ethics and will be addressed in a hearing."

Wilder, meanwhile, is confident he will retain his belt at the Barclays Center in New York.

"These fighters always get into great shape and think they have the game plan to beat me," he added.

"I hope he brings the best he can bring. This is more than just a boxing match. I'm passionate about what I do. This has been a long time coming for me and Dominic. He asked for this, and he shall receive."

"It's going to be an amazing night for me, and a sad night for him. Being heavyweight champion is a big responsibility. Not everyone is made to be a champion. It's more than being glamorous or carrying around this prestigious belt.

"I've trained harder than I've ever trained. He's got me inspired like I was against Bermane Stiverne. I want to hurt Breazeale so bad. I'm going to keep my composure until that time comes Saturday night."