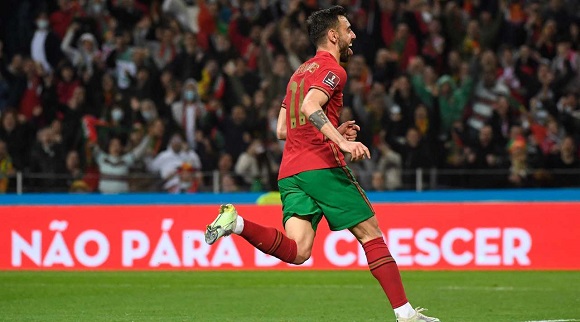 A Bruno Fernandes double gave Portugal a 2-0 win over North Macedonia to send them to the Qatar World Cup.

North Macedonia were hoping to build on their shock upset win over Italy last week, while Portugal found themselves one game away from the Qatar World Cup after beating Turkey in their first playoff tie.
Cristiano Ronaldo was named in the starting line-up and it was his excellent link-up play with Manchester United teammate Bruno Fernandes which allowed the playmaker to whip the ball past Stole Dimitrievski midway through the first half, and Diogo Jota came close to making it two.
READ ALSO: Cameroon win at the death against Algeria to book World Cup ticket
In the second half, Fernandes had a chance to double his tally and his side’s lead but sent in a weak shot, but was instrumental to a counterattack that he finished on 65 minutes to make it two.
Tempers briefly threatened to boil over when a spat between Jota and Ezgjan Alioski kickstarted a few minutes of petulance from both sets of players, but Macedonia did not have time to waste if they wanted to chase the game.
With the game slowing down as the visitors became aware they were beaten, the home crowd were able to celebrate their country’s success and turn their attention to Qatar.
Eurosport