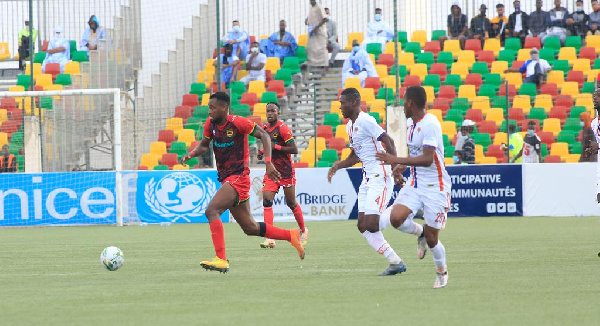 Asante Kotoko in the coming days will write a letter to the Government of Ghana appealing for fans to be allowed into the Accra Sports Stadium for their CAF Champions League return leg against FC Nouadhibou.

Football has been played behind closed doors in Ghana since the start of the league season last month, after government went back on an initial agreement to allow 25% capacity at all league venues.

According to the club's Communications Manager, Moses Antwi-Benefo, the Reds will make a request to admit 20,000 fans to the Stadium. He believes fans play a significant role in the game and granting them access to the Stadium will aid the club in their quest to kick out the Mauritania side.

We are going to write to the government through the Sports Ministry to allow to us admit fans to the stadium”, Moses Antwi-Benefo told Happy FM.

“When we went to Mauritania, we inquired from them how the fans were at the stadium to watch the game and they indicated that the country laws allow fans to attend the games. CAF also granted them the permission based on the COVID-19 protocols in the country.

So we will plead with the government to allow us to admit about 20,000 fans to the Accra Sports Stadium,” he said.

The Porcupines will today regroup at Adako Jachie for their first training session ahead of the return leg of the preliminary round tie on Sunday.

Kotoko host FC Nouadhibou on December 6 at the Accra Sports Stadium, with the aggregate winners progressing to the next round of the competition where a date with Al Hilal Club of Sudan or Ugandan outfit Vipers awaits.