Canelo cruises to victory over Golovkin in trilogy clash 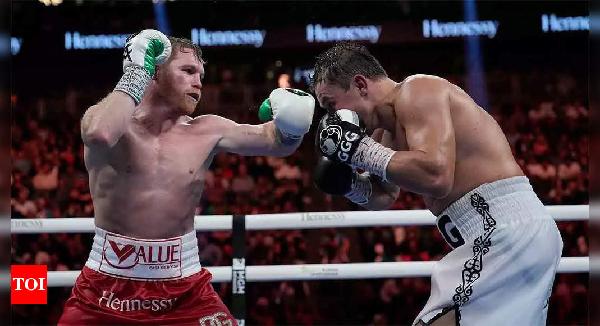 Saul 'Canelo' Alvarez brought an end to his bitter rivalry with Gennadiy Golovkin on Saturday as the Mexican won the fighters' trilogy fight on a unanimous decision to retain the undisputed super middleweight world title in Las Vegas on Saturday.

Alvarez was hardly ever troubled as his 40-year-old opponent, the present undisputed middleweight champion, struggled to match the vitality and work charge of the title holder, who defeated Golovkin for the second time in three meetings.

"Thank you for everything, thank you Golovkin," said Alvarez. "We gave the fans three good fights.

"I've gone through some very difficult things in my life and the only thing you can do is try to continue and move forward.

"He's a really good fighter. I know he's strong, he's a great fighter and that's why we're here and I'm glad to share the ring with him.

The pair previously fought in the same T-Mobile Arena for the middleweight title in 2017 and 2018, with a draw controversially declared in the first fight before Alvarez won the second on a split decision.

But this contest bore few of the hallmarks of either of those absorbing encounters, with Alvarez controlling the centre of the ring for the majority of the fight and dominating with his faster hand speed.

The win was the perfect return to form for the 32-year-old after losing for only the second time in his career in his previous fight, when he was defeated by WBA light heavyweight champion Dmitry Bivol in May.

Golovkin was second-best throughout the first two-thirds of the fight before he finally came to life in the ninth round, rattling the champion with a left hook and increasing his output.

"You lose one punch, you lose the fight. Look at his face, look at my face. We're like this because it was a high-level fight because we trained well and we did a very good quality fight.

"This fight was more tactical, like chess. Today Canelo was better."