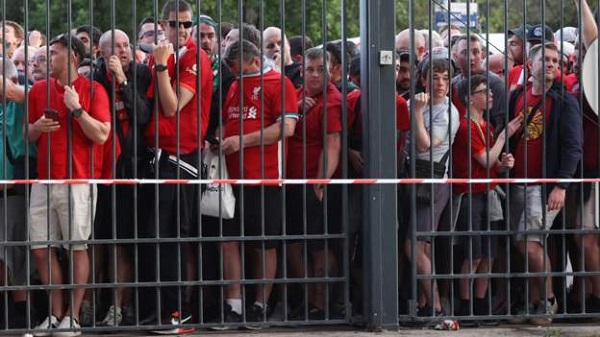 UEFA has commissioned an independent report into the scenes outside the ground that delayed Saturday's Champions League final between Liverpool and Real Madrid.

Kick-off at the Stade de France in Paris was delayed by over half an hour with Liverpool ticket-holders seen waiting in huge queues, and French police later using tear gas on crowds.

On Monday, French authorities complained of what they called "industrial-scale" ticket fraud amid a row over the game's policing.

French sports minister Amelie Oudea-Castera said there were "no problems" regarding Madrid supporters and the Spanish side had controlled their travelling fans better than Liverpool, who had let their supporters "out in the wild".

Liverpool chairman Tom Werner has since written a letter to Oudea-Castera "demanding an apology" for her comments.

Werner wrote: "The events that occurred in and around the Stade de France on Saturday night at the Uefa Champions League final were not only incredibly dangerous for all who attended, but raised serious questions about the organization and operation of the event.

"This should be the focus of all interested parties today rather than pursuing a blame game strategy via press conference.

"The UEFA Champions League final should be one of the finest spectacles in world sport, instead it devolved into one of the worst security collapses in recent memory."

Liverpool chief executive Billy Hogan has said the club are "reviewing legal avenues available to us on behalf of affected supporters".

In an interview on the Liverpool website, Hogan said he was "incredibly surprised" by Oudea-Castera's remarks, calling them "completely inappropriate".

He added: "We just feel that everyone should be focused on getting the investigation right and less about making inflammatory comments that attempt to deflect responsibility for what happened on Saturday night."

UEFA said a "comprehensive review" would examine a number of factors which include the decision-making, responsibility and behaviour of all parties involved in the final, it added.

UEFA said in a statement: "Evidence will be gathered from all relevant parties and the findings of the independent report will be made public once completed. Upon receipt of the findings, UEFA will evaluate the next steps."

The report will be independently compiled and Dr Tiago Brandao Rodrigues from Portugal will lead the production of the review.

UEFA initially blamed the "late arrival" of fans for the problems, delaying kick-off by 36 minutes, with Liverpool going on to lose 1-0 to Spanish champions Real Madrid.

France's interior and sports ministers acknowledged difficulties in managing crowds at the final but have been pointing blame for the chaos at fans with fake tickets and local youths trying to force their way into the stadium.

However, a spokesperson for France's independent police commissioner's union (SICP), Mathieu Valet, told the BBC's Newshour that "supporters without tickets or with fake tickets were not the main problem".

"It's clear that we needed more police - we didn't have enough on the ground," he said.

On Sunday, Liverpool called for an investigation into the "unacceptable issues" faced by fans before the match.

Many claimed they had been at the stadium hours before kick-off but were stopped from getting into the ground.

UK sports minister Nigel Huddleston said he was "very concerned about the upsetting scenes", while Reds defender Andy Robertson said the organisation of the match was a "shambles".