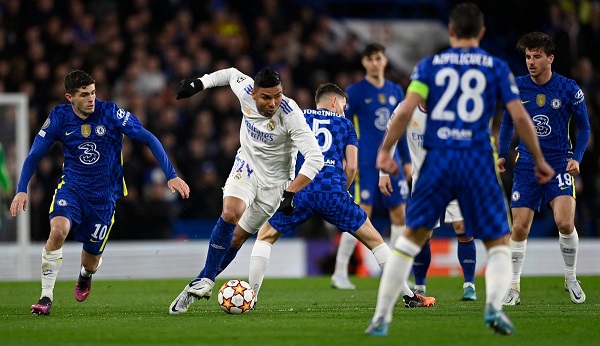 A spot in the UEFA Champions League semi-finals will be on the line when La Liga leaders Real Madrid square off against reigning European champions Chelsea in the second leg of the quarter-finals tonight at the Santiago Bernabeu.

Real Madrid already have one foot through the doors into the next round after securing a stunning 3-1 victory in the first leg at Stamford Bridge, riding on the brilliance of Karim Benzema. Following that victory, Carlo Ancelotti’s men warmed up for the second leg with a comfortable 2-0 win over Getafe in La Liga over the weekend.

As for Chelsea, the Blues were all over the place, especially in the first half, at home in the first leg last week. Manager Thomas Tuchel demanded a strong reaction from his team, and that is what he got as the west Londoners thrashed Southampton 6-0 in the Premier League on Saturday. The victory will have come as a huge morale boost for Chelsea ahead of the trip to the Spanish capital.

While Tuchel’s side are at a disadvantage heading into the second leg, they will do well to remember that they got the better of Real Madrid in the semi-finals last season. And the Blues will be hoping to pull off a comeback on Tuesday while the Merengues will be keen on guarding against complacency and seeing the tie through professionally.

Real Madrid have welcomed Ferland Mendy and Luka Jovic back into the squad for the game against Chelsea. However, ex-Blues superstar Eden Hazard remains unavailable for selection. Castilla defender Rafa Marin has also been called up by Carlo Ancelotti as Eder Militao is suspended for the tie while Jesus Vallejo is out with Covid-19.

Ancelotti made a few changes to his starting lineup for the weekend clash against Getafe. He will reinstate his regulars to the XI when Chelsea come visiting. Thibaut Courtois is a certain starter between the sticks and will be hoping to keep a clean sheet against his former club.

Dani Carvajal, who was rested at the weekend, should return at right-back while Mendy ought to come back into the side on the left. David Alaba is a guaranteed presence at the heart of the defence and could be partnered with Nacho in the absence of Militao. Rafa Marin could be a choice if the manager opts for more physicality and robustness at the back.

Casemiro should hold the fort in the middle of the park as usual for Real Madrid. Luka Modric and Toni Kroos, who were rested against Getafe, should return to the side, slotting in the remaining two midfield slots. Eduardo Camavinga will feel hard done by, after impressing in the weekend game, but Ancelotti will go for the experience of Kroos in all likelihood.

Federico Valverde will likely be deployed again on the right flank, much like the first leg at Stamford Bridge. He might not be a natural winger but adds a lot of value with his work rate and ability to carry the ball forward. Vinicius Junior is a certainty on the left-wing for the Merengues, with Karim Benzema spearheading the attack.

Chelsea have travelled to Spain without club-record signing Romelu Lukaku, who is out with an injury. In addition, Callum Hudson-Odoi remains sidelined with an injury, while Ross Barkley misses out through illness. Ben Chilwell remains a long-term absentee for the Blues.

Thomas Tuchel deployed his team in a three-man defensive unit in the first leg before switching to a traditional four-person backline in the second period. So, it will be interesting to see which way he leans on Tuesday night. However, following the win against Southampton, changes could be minimal.

Edouard Mendy will guard the goal as usual. Antonio Rudiger, Thiago Silva and Andreas Christensen, who struggled in the first leg, ought to form the three-man defensive unit. The Dane will need better defensive support from Reece James, who will also be tasked with providing the width going forward on the right flank.

Marcos Alonso, who scored against the Saints, should continue as the left wing-back. Mateo Kovacic and N’Golo Kante should continue in the middle of the park again, with Jorginho likely to be left on the bench. Mason Mount will don the creative hat slotting in as the No. 10 from where he will look to pull strings in the final third.

Up top, Kai Havertz is a certain starter owing to his recent form. Timo Werner, who enjoyed a fine game against Southampton, should partner him in attack, with his pace likely to cause the Real Madrid defence some problems.