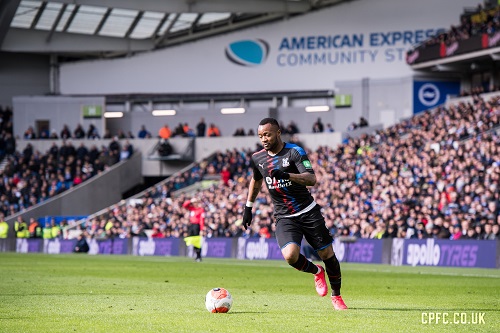 Roy Hodgson has praised Jordan Ayew after his latest goal guidedÂ Crystal Palace to a 1-0 victory over BrightonÂ And Hove Albion in the Premier League.Â

The Ghanaian ended his five-game goal drought by scoringÂ the only goal of the game that separated the two sides at theÂ Amex Stadium.

Ayew struck with 20 minutes remaining after latching onto Christian Benteke's pass inside the box to claim victory for his side with the goal his seventh of the season in the league.

Speaking in his postmatch interview, Roy Hodgson hailed the impact of the Ghanaian who sealed a permanent move to the Eagles on a three-year deal following his season-long loan spell with them lastÂ season.

"Of course, last year he didnâ€™t score many goals and that was something which bothered him and I suppose was a factor for us. Are we going to get the goals out of him that we need? We knew what else he gives - but is he going to give us goals as well?

"Thatâ€™s what heâ€™s started to do this year. Heâ€™s scored a large proportion of our goals and heâ€™s still contributing to the team in so many other ways.

He added: "His contribution without goals is enormous: that work rate, that desire, that constant thorn in the opposing teamâ€™s defence and also the fact that when we lose the ball heâ€™s so quick to get back in position and help us defensively which is something you need and itâ€™s contributed to our last two clean sheets."

The win moved Crystal Palace to 12th on the standings with 36 points after 28 matches.Â The Eagles will next host Watford at the Selhurst Park in Premier League matchday 29.