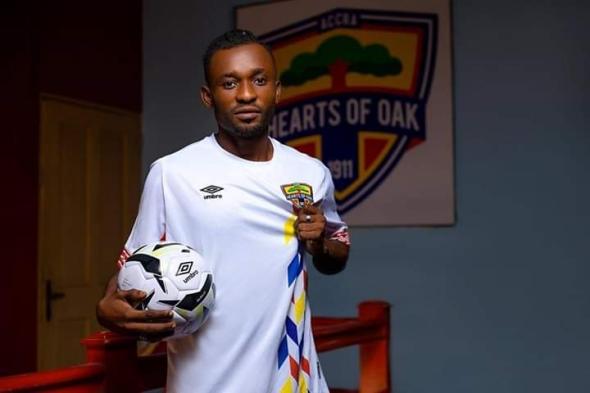 Hearts of Oak midfielder Frederick Ansah Botchway have revealed his admiration for the club's new signee Eric Dizan, saying he is the most skillful player at the club.

Speaking in an interview Ansah Botchway said Dizan is the most skillful player in the team.

â€œI think there's this guy who has been training with us. I don't know why he hasn't played yet but he is the most skillful player in the squad. Very skillful. He is Ivorian. His name is Eric (Dizan)â€, the midfielder noted while speaking to Angel FM's Saddick Adams in an Instagram live video.

Ivorian international Eric Dizan completed a transfer to Ghana Premier League club Hearts of Oak on a 2-year-contract,Â this month.

The 26-year-old has had stints withÂ Abidjan, RC BettiÃ© and Ivoire AcadÃ©mie in theÂ Ivorian top-flight.

Meanwhile,Â Hearts of Oak have denied reports that they have signed Ghana international midfielder Sulley Muntari on a free transfer.

Media reports on Friday, suggested that the Phobians have capture the former Inter Milan player to bolster their team ahead of the Ghana Premier League resumption.

However, Hearts of Oak have issued a statement, urging its supporters to disregard the reports of Sulley Muntari's signing, adding that supporters will be made known if a player has joined the 1911 club by posting it on their official handles.

"Hearts Of Oak is the Premier club in Ghana and will continue to set the standards, we therefore urge our supporters not to rely on information unless it comes from our official handles."

"Hearts Of Oak wants to notify the general sporting public that we have not signed Ghana International Sulley Muntari as it's being reported by the media. Sulley is a great player and a friend of the club. We will continue to unveil the players we have signed."