Errea replicas will be ready next month - Kotoko CEO to fans 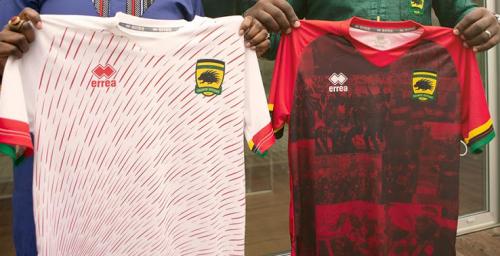 Chief Executive Officer of Asante Kotoko, Nana Yaw Amponsah has assured supporters of the club that they will have the opportunity to purchase the club's Errea replicas from next month.

Ghanaian giants Kumasi Asante Kotoko in early October announced Errea as their new kit sponsors for the next three years.

The Italian kit manufacturing firm replaced Portuguese kit manufacturer Strike who had been kitting the Kumasi-based club for seasons.

The club announced a shot code for fans of the club to vote for two of the four designs to be used as the club's home and away jerseys for the coming season.

After the selection process, officials and players of the club have started donning the jerseys however, supporters have been wondering when they will also have the chance to also wear theirs.

According to Nana Yaw Amponsah, Asante Kotoko replicas will be ready by January 25, 2021. and supporters will get the chance to pre-order theirs.

Meanwhile, Asante Kotoko will be in their Errea Kit on Sunday when they face Medeama SC in their outstanding Premier League game at the Akoon park in Tarkwa.