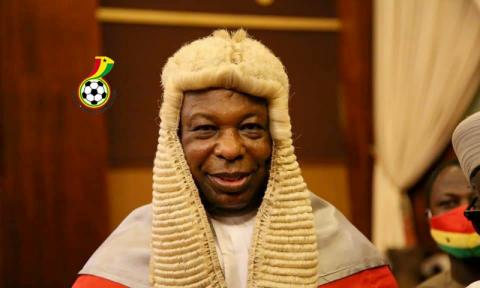 Ghana Football Association  (GFA) has congratulated Issifo Omoro Amadu Tanko on his appointment as the Justice of the Supreme Court.

In a release, GFA said they are proud but unsurprised by the achievements and the well-deserved elevation of Justice Issifo Omoro Amadu Tanko.

They further said they wish the former Chairman of the GFA Appeals Committee well as he charts a new path.

READ ALSO: Akufo-Addo appoints the first Muslim to the Supreme Court of Ghana

Amadu Tanko JSC was sworn into office on Friday, May 22, 2020 by President Nana Addo Dankwa Akufo-Addo to begin his distinguish service as Justice of the Supreme Court of Ghana.

His Lordship, Amadu Tanko got appointed to the High Court in 2008 and was promoted to the Court of Appeal after four years.

We are profoundly proud but unsurprised by the achievements and the well-deserved elevation of Justice Issifo Omoro Amadu Tanko.

As a former Chairman of the GFA Appeals Committee and other judicial bodies of the Football Association, his contribution to the judicial jurisprudence of the GFA cannot be overemphasized. His knowledge, dedication and humility are also well known to us.

Amadu Tanko JSC has glittered wherever he has worked and we are confident he will repose the confidence both the Executive and Legislative arm of our government have showed in him.

The GFA wishes Supreme Court Judge Amadu Tanko the very best as he begins this important journey for the nation."