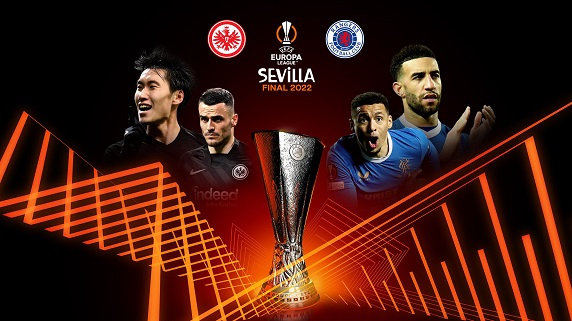 Eintracht Frankfurt and Rangers will get a chance to end decades of despair when they meet in the Europa League final today, Wednesday, May 18, 2022.

For Frankfurt, it will be an opportunity to win its first European trophy in more than 40 years. For Rangers, a chance for its first continental title in 50 years.

Triumph in the second-tier competition in the Spanish city of Seville will also guarantee the winner an automatic spot in the group stage of next season’s Champions League.

“For Eintracht, for the fans, for the club, for the players, (winning again after 42 years) would be the most important thing ever,” Frankfurt coach Oliver Glasner told UEFA.com. “It has extraordinary significance, great significance, and that’s why we’re going to try our best so that we come home with the trophy and spend one or two nights celebrating with our fans.”

It will be Frankfurt’s first European final since beating Borussia Mönchengladbach in 1980 in an all-German matchup in the UEFA Cup, the predecessor to the Europa League.

Rangers was close to European glory when it played in the UEFA Cup final in 2008, but it lost to Zenit St. Petersburg. The Scottish club is looking for its first European trophy since earning the Cup Winners’ Cup in 1972.

Both clubs have huge fan bases, and tens of thousands are expected to swarm into southern Spain this week to try to see their team succeed again, prompting concern from local authorities and UEFA.

There had been fan violence involving visiting fans in Seville when local clubs Sevilla and Real Betis hosted matches earlier in the competition. Before the semifinals between Frankfurt and West Ham in Germany, more than 30 arrests were made after supporters of both clubs clashed in several locations in Frankfurt.

Fans of the German club also attracted headlines when more than 30,000 made their way into the Camp Nou in Barcelona for the second leg of the quarterfinals.

UEFA has asked for fans without tickets not to travel to Spain for Wednesday’s final, and warned about the dangers of purchasing tickets on the secondary market.

More than 40,000 seats will be available at Ramón Sánchez-Pizjuán Stadium, but only about 10,000 tickets were allocated to each club. Sevilla city officials planned to open fan zones to accommodate those not able to make it to the game.

The match will pit two physical and high-intensity teams with impressive runs to the final.

Rangers, led by captain and top scorer James Tavernier, lost its first two group games but eventually gained momentum. It will be boosted by having already eliminated two German clubs — Borussia Dortmund in the first knockout round and Leipzig in the semifinals.

“When you’re in the knockout stages, it’s all or nothing, and the character of my players has been outstanding,” said Rangers coach Giovanni van Bronckhorst, who was hired in November after Steven Gerrard joined Aston Villa. “To be able to win against those strong opponents is really good, so we have the character to play this final, we have the qualities, and we also have the belief. That’s the most important thing, to have the belief that you can achieve.”

Frankfurt, led by veteran goalkeeper Kevin Trapp, made it to the final unbeaten after eliminating some strong opponents — Real Betis in the round of 16, Barcelona in the quarterfinals and West Ham in the semifinals. Frankfurt is trying to become the third unbeaten team to win the title in the Europa League era, after Chelsea in 2019 and Villarreal in 2021.

“Every team that gets to the final has earned it because it’s a long road. You have to win a lot of matches,” Glasner said. “Rangers eliminated two top teams from the Bundesliga over two legs. That shows they’re very good and also shows they’re well equipped for German football, so I’m expecting a very even, hard-fought contest.”

The last encounter between the two clubs was painful for Rangers. The Scottish club conceded six goals in each of the two legs of the European Cup semifinals in 1960, being deprived of an opportunity to play a home final in Glasgow. Frankfurt went on to lose the final to Real Madrid 7-3.

Frankfurt hasn’t made it back to Europe’s top club competition since that final, while Rangers made its last appearance in the group stage of the Champions League in the 2010-11 season.

The last time the UEFA Cup final was played in Seville, in 2003, Rangers’ Scottish rival Celtic lost the title to José Mourinho-coached Porto.