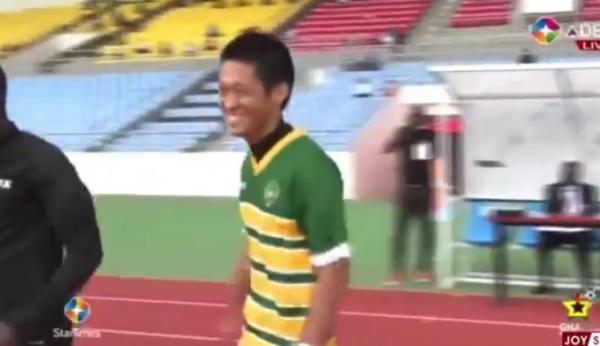 Japanese striker Jindo Morishita has set his sights on scoring his first goal for Ebusua DwarfsÂ after making his debut.

The 25-year-old climbed off the bench in the second halfÂ to enjoy 26 minutes of action after replacing attacker Obed Bentum as he became the firstÂ Asian to feature in a Ghana Premier League match.

And the forward has taken to social media to reveal his excitement after playing his first match and has vowed to do his best to aid the club.

"Made my debut in Ghana. I was able to stand on the pitch as the first Japanese in the history of the Ghana League. This is the real starting line. The next goal is starting lineup, goal and victory, Jindo said."

He added: "We will continue to make good preparations so that we can contribute more to the team.

Thank you for your continued support from Japan!"

Ebusua Dwarfs and Eleven Wonders drew 1-1 on match day 19 of the Ghana Premier League at the Cape Coast stadium on Friday.

The Techiman lads came into the game as underdogs judging from their poor away form in the League but after drawing with Asante Kotoko, they quickly regrouped for the fixture against Dwarfs.

The game was decided in the opening 15 minutes when both sides scored within two minutes to cancel out each other.

Ebusua Dwarfs took the lead in the 13thÂ minute when Michael Asamoah took advantage of a fine team move to slot home.

But Wonders hit back quickly after the restart as the hosts allowed Clement Boahen to fetch the equalizer two minutes later.

The draw took Ebusua Dwarfs points tally to 24 while Wonders jump to 22 points after 19 games.