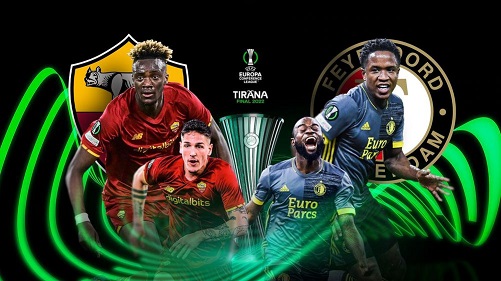 Jose Mourinho will aim to extend his perfect record in European finals when his Roma side face Feyenoord in the inaugural Europa Conference League final tonight.

The Portuguese has won all four of his finals - two with Porto and one apiece with Inter Milan and Manchester United.

He will become the first manager to lead four teams in a European final.

"If I win I will become the first one to win all European trophies, but that's only if I win," said Mourinho.

He led Porto to Uefa Cup success in 2003 and a stunning Champions League triumph the following season. He claimed Europe's top club prize again with Inter Milan in 2010 and took Manchester United to the Europa League title, formerly the Uefa Cup, in 2017.

Mourinho famously dubbed himself "a special one" when he first took charge of Chelsea in 2004, a moniker he now seems keen to leave in the past.

"The 'Special One' story is an old story," added Mourinho. "It was when I was at the beginning [of my career]. When you have more maturity and stability, you think more about the people and less about yourself.

"When you arrive at a final after a season of work, the work is done. It's the team's moment, not the moment of an individual.

"For me, no matter how the final ends, this is a positive season for us."

Feyenoord have not reached a European final since winning the 2002 Uefa Cup.

Arne Slot's side, who finished third in the Dutch Eredivisie, have the Conference League's leading scorer in Cyriel Dessers with 10 goals.

However, Tammy Abraham, who has enjoyed a stellar first season with Roma after joining from Chelsea, has scored nine.

The England striker has 27 goals in all competitions, including two on the final day of the Serie A season against Torino to seal sixth place and Europa League qualification.

Abraham also scored the only goal in the second leg of Roma's semi-final victory over Leicester.

Roma have not won a trophy since lifting the Italian Cup in 2008 and not won a European trophy since the Fairs Cup - the predecessor to the Uefa Cup/Europa League - in 1961.

"For me it's not a little cup," said Abraham in response to suggestions that the Conference League pales in comparison to Europe's two established tournaments.

"I believe every final is a final, no matter what competition it is. You get to the final, you want to win the final.

"It's a trophy and these are the moments you look back on in your career, saying you want to win trophies."

'The fans would have filled the Bernabeu'

The 20,000-capacity National Arena was not big enough to satisfy the demand for tickets.

Feyenoord said they were disappointed with the allocation of 4,000 tickets and have asked fans not to buy from touts.

Roma reached the semi-finals of the Champions League in 2017-18 and the Europa League semi-finals last season.

Mourinho has rebuilt his reputation to some extent in Italy after a chastening time in charge of Manchester United and Tottenham in the Premier League.

"His CV makes you wary of his team," said Slot. "He is known for winning many finals.

"But we mainly have to focus on his team, the tactics and the different ways they play. We shouldn't pay too much attention to the fact that he has such an impressive track record in finals."