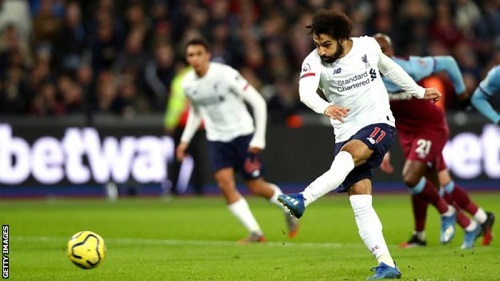 Liverpool moved 19 points clear at the top of the Premier League with a routine win that intensified the pressure on West Ham at the bottom of the table.

Mohamed Salah's first-half penalty and Alex Oxlade-Chamberlain's composed effort after the break maintained the Reds' relentless march towards a first top-flight title since 1990.

The result leaves the Hammers in 17th and above 18th-placed Bournemouth, and Watford in 19th, on goal difference.

Backed by a vociferous crowd inside London Stadium, David Moyes' side had started in determined fashion, limiting Liverpool to few efforts on target.

However, Issa Diop's foul on Divock Origi allowed Salah to put Liverpool ahead from a penalty and their first shot on target.

The Hammers did have chances to score in the second period, notably via Manuel Lanzini's scuffed close-range shot and Robert Snodgrass' hurried effort.

But Liverpool always looked capable of extending their advantage, with Oxlade-Chamberlain doubling their lead with a right-foot shot into the bottom left corner after good work from Jordan Henderson and Salah.

It ensured a comfortable conclusion to the evening for Jurgen Klopp's side, who are now unbeaten in 41 Premier League matches.