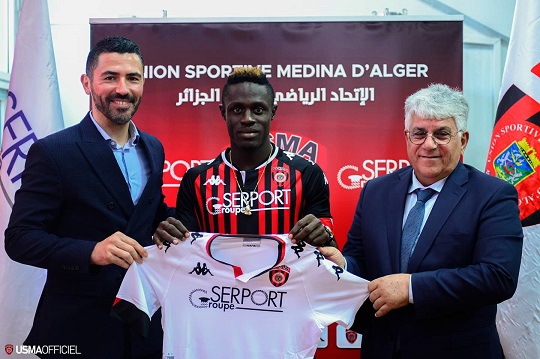 The striker signed a four-year deal with the North African side last month in a deal worth over 350,000 euros, according to reports.

Opoku on Tuesday he was unveiled by the Algerian club after completing the necessary formalities.

SpeakingÂ during his unveiling, the 22-year oldÂ said his ultimate goal is to play well and be a great team player in order to help the club win the Algerian League.

â€œMy ultimate goal and aim is to play well for the team and also be a great team player so I can help my team to possibly win the Algeria Ligue 1 at the end of the seasonâ€, he told the club media.

â€œI want to play and play well, and I also want to be a reliable player for the club and not only help the team in the league but any other competition the team finds itself or take part and I want to help my team so we can be successful in all competitions will participate in during my time hereâ€, he added.

Opoku also pleaded with the Red and Black fans to remember him in prayers.

â€œWhat I say to the fans or requests from them is their prayers. I want them to pray for me and also give me unflinching support to be able to be a success story at the clubâ€, he said.

â€œI have always received encouraging words and messages from the fans after my deal with the club was announced and I must say that made me happy and served as a morale boost and a big motivation for me and I want to use this opportunity to say a big thank you to all the lovely fans of this esteemed football teamâ€, Opoku added.

Kwame Poku scored 9 goals in 16 appearances for Asante Kotoko before his move to Algeria.