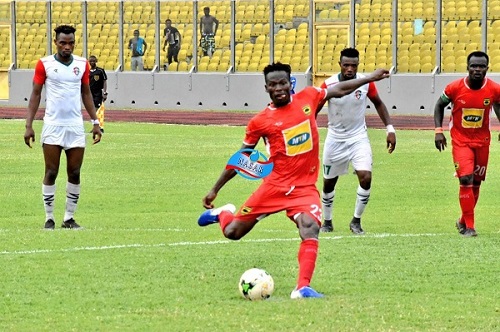 Spokesperson for Ghana Premier League clubs Patrick Akoto has denied reports that the Ghana Football Association have agreed to play penalties after draws in League matches.

His comments follow that of media reports that circulated after a meeting between the Executive Council and the Ghana Premier League clubs at the M Plaza Hotel in Accra on Monday morning.

According to the reports the Ghana FA Executive Council have agreed with clubs across all the leagues to adopt penalty kicks to award points in case of drawn games in the leagues.

This is one of the many measures to address Ghana's abysmal penalty record in competitions. According to statistics gathered Ghana has only converted 65% of all penalty kicks we have been involved in.

However, Patrick Akoto has stated that the consultative meeting never settled on penalties after League matches.

"It is not true that we have settled on penalties after a League match, It is true that the penalty kick issue came up for discussion that we should explore ways that we can enhance the players' performance from 12 yards because the recent heartbreaks are one too many but it was only a suggestion proposed."

"The final decision on it will be taken at Congress on December 12," he told Angel FM.

Meanwhile, another fallout from yesterday's meeting was the change in date of the upcoming Ghana Premier League season. The League which was earlier reported to start on December 21 has been moved to December 28.