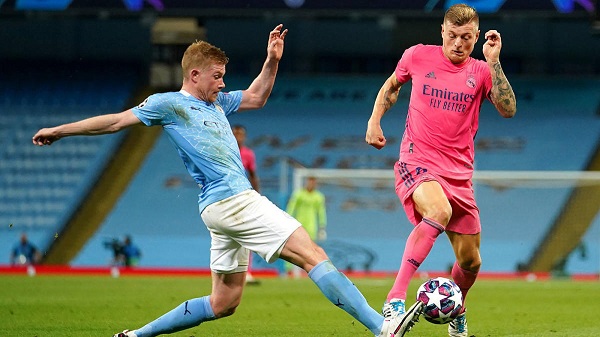 City toppled Atletico Madrid last time out in their attempts to reach a second final in as many years, although this will be a different proposition entirely.

Carlo Ancelotti’s side, as they proved against both Chelsea and Paris Saint-Germain, simply know how to produce big moments on the grandest stage. They may not always convince, but Madrid boast the kind of star quality to hurt any team in the world.

Few, of course, would doubt City’s quality, although they are a touch less experienced in grinding results out in this particular competition.

The Etihad Stadium in Manchester will host the semi-final first leg.

Joao Cancelo’s suspension for the first leg makes a defensive crisis worse for Pep Guardiola. Kyle Walker missed the win over Watford with an ankle injury, alongside John Stones.

Guardiola has confirmed both are doubts for tonight: “They didn’t train last week, ten days, John since Brighton. We will see how they feel, and make a decision tomorrow.”

Nathan Ake was only fit enough for the bench against Watford after some fitness concerns while Ruben Dias played his first full game in a while, meaning City could be fairly light in the defensive department.

Real Madrid boss Ancelotti has confirmed that David Alaba remains a doubt, along with Casemiro.

Speaking at his press conference on Monday, Ancelotti hinted Alaba - who has started 44 games across all competitions this season - was struggling with a hamstring problem.

Alaba has traveled to Manchester, alongside Ferland Mendy, in a big boost for Ancelotti.