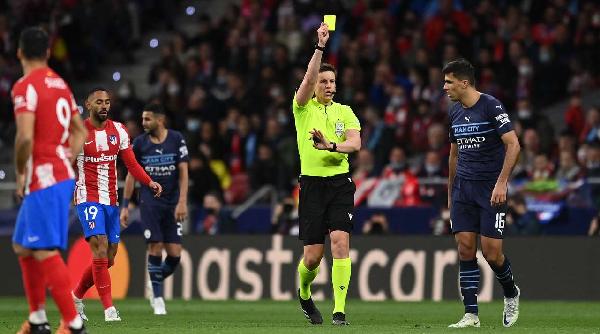 Manchester City are through to the semi-finals of the Champions League, having held Atletico Madrid to a goalless draw at the Wanda Metropolitano.

Having come into the game with a 1-0 deficit from the first leg at the Etihad, Atleti knew they couldn’t simply sit deep and look to hurt their opponents on the counter as they did against Manchester United at Old Trafford last month.

They came flying out of the blocks, pressing hard and threatening to score when Joao Felix got behind on the right and was inches away from finding Thomas Lemar as he charged into the area.

With a hostile home crowd whistling City’s every touch, Atleti produced a series of fiesty challenges which culminated with Felipe leaving Phil Foden crumpled on the turf after a brutal aerial duel.

He was lucky to avoid a booking – his stray elbow left Foden bleeding from the head and bandaged up for the rest of the game – with City’s anger only compounded when he was cautioned not long afterwards for smashing into the back of Kevin De Bruyne.

Despite their opponents’ naked aggression, City gradually began to assert themselves. De Bruyne saw a wicked shot blocked by Reinildo, before some sharp interplay between Riyad Mahrez, Kyle Walker and Foden ended with the latter laying off to Ilkay Gundogan who, striking the ball low and hard, hit the base of the post.

Geoffrey Kondogbia gave Ederson a scare with a deflected effort as the first half wore on but, come halftime, City were in control.

Atletico started the second half in much the same way they had the first, however, with Antoine Griezmann nipping in behind on the right and unleashing a shot from a tight angle only for Aymeric Laporte to get his foot in the way.

Funnelling the ball down the flanks through Renan Lodi and Marcos Llorente, the hosts made two decent chances for Joao Felix in quick succession but, ultimately, he couldn’t convert either. Having failed to score he looked to turn provider, teeing up Griezmann on the edge of the area for a shot which whistled just wide of the upright.

Rodrigo De Paul, on as a substitute, twice fired wide as the game drew to a close, while Atleti howled for a penalty when Joao Cancelo appeared to catch Angel Correa across the shins. Diego Simeone’s side fought tooth and nail for a goal, Matheus Cunha forcing John Stones into a game-saving block right at the death, but City held firm – helped by a belated red card for Felipe – and will now face Real Madrid for a place in the final.