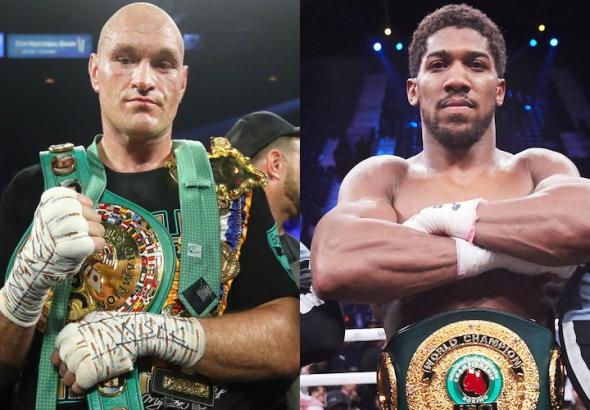 Talks over a huge world heavyweight title unification fight between Tyson Fury and Anthony Joshua in Saudi Arabia are officially underway, according to ESPN.

The British rivals, who between them hold every major heavyweight belt, had been expected to finally meet in the ring at some point in 2021.

But with the coronavirus crisis throwing both Fury and Joshua's next title defences into doubt, discussions over a mega-money showdown in December are now being held.

The Gypsy King was scheduled to face Deontay Wilder for the third and final time in Las Vegas this summer, having knocked him down twice on his way to a seventh round stoppage victory in their rematch in February.

READ ALSO:Â Anthony Joshua calls on Tyson Fury to 'come and fight' to determine the No.1 heavyweight boxer

The Bronze Bomber exercised a clause in his contract to secure the trilogy fight, but ESPN claim that he is likely to be paid-off in order to give up his shot at revenge.

It has been reported that Fury's advisers, MTK, are negotiating terms with Joshua's promoter, Eddie Hearn, because of a 'rift' between the Matchroom Boxing chief and Frank Warren, who usually handles talks for the WBC champion.
That has opened up the possibility of a Battle of Britain between Fury and Joshua being pushed forward, with Hearn telling ESPN: 'The conversations between myself and MTK are that we've had an approach.

'We've had a number of approaches from territories to stage that fight. So the only discussions at the moment are where this fight takes place - and we don't even know when this fight could take place.

'We're certainly open to have discussions about the possibility of this happening this year or in the next fight.'

Asked about the possibility of facing Joshua in Saudi Arabia, Fury told ESPN: 'I'll fight in Timbuktu if the money's right. I have a bag, and I will travel.

The offer for Fury would need to be large enough to pay off Wilder, who has previously insisted that he has no intention of pulling out of the third fight.

Joshua, meanwhile, was due to defend his WBA, IBF and WBO belts against Kubrat Pulev at the Tottenham Hotspur Stadium in June, but the fight has been postponed because of the coronavirus pandemic.

It was originally hoped that Joshua could face the Bulgarian at the same venue in July, but that now appears unlikely.