U-20 WAFU Zone B Cup: Ghana drawn in Group B with Nigeria 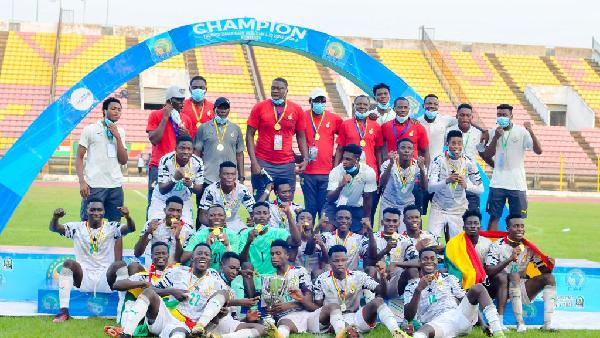 The Black Satellites of Ghana have discovered their opponents after the 2022 WAFU Zone B U-20 Cup of Nations draw was held in Niger on Friday.

The Black Satellites have been pooled in Group B alongside rivals Nigeria and Burkina Faso for the upcoming tournament.

Meanwhile, the host country, Niger has been paired against Côte d'Ivoire, Togo, and Benin.

The reigning champions will be hoping to defend their title next month.

The biennial tournament will be held in Niamey, Niger, from Saturday, May 7 to Friday, May 20, 2022, as a qualifier for the U-20 Africa Cup of Nations.

The Black Satellites came from behind to beat Burkina Faso 2-1 to win the 2022 Championship at the Stade Charles De Gaulles in Porto Novo in Benin last year.

Ghana went ahead to conquer the rest of Africa at the main tournament in Mauritania, beating Uganda 2-0 in the finals in Nouakchott to win their fourth title in the history of the tournament.

The top four teams will qualify to the FIFA U20 World Cup held in Indonesia later that year.

Coach Abdul Karim Zito and his Black Satellites are currently at the Ghanaman Centre of Excellence in Prampram preparing to defend their crown.

Ghana’s national U-17 team, the Black Starlets have been paired against Nigeria and Togo in group A of the 2022 WAFU Zone B U-17 Cup of nations held in Niger on Friday.

The WAFU Zone B leadership has chosen Cape Coast, Ghana, as the host city for the upcoming tournament

The tournament, which will serve as a qualifier for the U-17 Africa Cup of Nations, will be held in the Central Regional capital from Saturday, June 11 to Friday, June 24, 2022.

Meanwhile, Cote d'Ivoire, Benin, Burkina Faso and Niger will battle it out in Group B.

The Black Starlets are determined to qualify for the 2023 Africa Cup of Nations after failing last time.

Since December 2021, coach Samuel Fabin's team has been preparing for this competition.