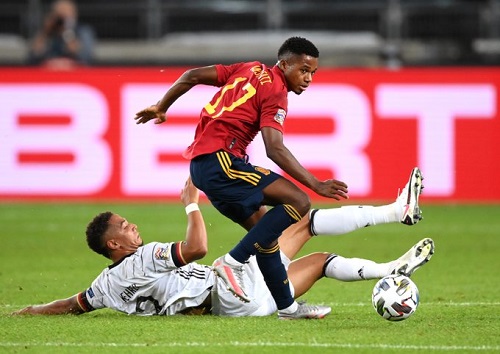 The UEFA Nations League kicked off its new season on Thursday, highlighted by Spain and Germany settling for a draw in Stuttgart.

In total, 10 matches were played but just Spain vs. Germany involved elite European national teams. In what looked like a sure win for Germany ended all square with some late drama.

Here are the scores from the day's action as well as three takeaways:

This was the highlight game of Thursday's slate, but the first half offered very little. The second was much better with plenty of chances for each. All signs pointed to a Germany win after Timo Werner's goal early in the second half and with the game entering added time.

Werner, who joined Chelsea from RB Leipzig this summer, looked really sharp and could have come away with at least another goal on the night. Paired with new Bayern Munich man Leroy Sane, their combined speed was tough for Spain's defense to deal with, with the striker scoring a fine goal 51 minutes in.

In the end, the win for Germany was taken from them with the last chance of the game as a ball from Ferran Torres ended at the feet of Jose Gaya after a header from Rodrigo, with the Valencia defender finishing from close.

All in all, it's a good result on the road for Spain while Germany once again struggles to get a result at home.

Barcelona young talent Ansu Fati made his debut for the Spanish national team at 17 years of age, becoming the youngest player to debut for Spain in 84 years. The talented winger looked fairly sharp down the left and got a good run out that will only increase his confidence. The minutes played could also really help him get into a rhythm ahead of a season at Barca where he could play a lot of Lionel Messi leaves the club.