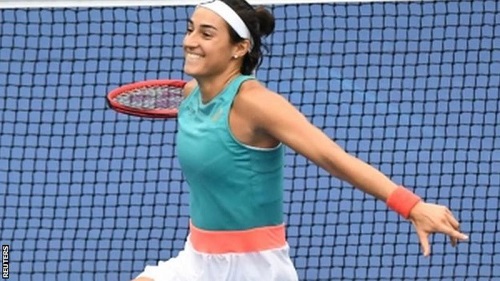 Top seed Karolina Pliskova was knocked out of the US Open in the second round with a heavy defeat by France's Caroline Garcia.

Meanwhile, other seeds to tumble were Elena Rybakina (11), Marketa Vondrousova (12) and Alison Riske (13).

Six of the world's top 10 players were already absent from the behind-closed-doors tournament amid the coronavirus pandemic.

Pliskova hit just one winner in a poor first-set performance and fell a break down early in the second - smashing a racquet in frustration - before improving her level to carve out two set points.

But she failed to convert them and Garcia went on to take it to a tie-break, which she dominated.

"I thought she played great tennis in the first set," Pliskova said. "She was just playing super aggressive, going for her shots.

"I maybe didn't play my best. But that's how it is sometimes. I'm not a robot, so I don't have to play every day amazing."

Garcia, who has won seven tour titles, will face American world number 41 Jennifer Brady in the next round.

'I feel like I should be using my platform' - Osaka

Osaka, who beat Williams to win the US Open title in 2018, said she was "stressed" over whether a hamstring injury would impede her progress before the tournament began.

Playing with heavy strapping on her left thigh, she never looked threatened by Italy's Camila Giorgi and sailed to a 6-1 6-2 victory in 69 minutes.

Osaka faces an even less challenging test in the third round, when she plays Ukrainian world number 137 Marta Kostyuk.

The Japanese 22-year-old has brought seven face masks to Flushing Meadows to highlight racial injustice in the United States, each bearing the name of an African-American who has died.

On Monday it was Breonna Taylor, who was fatally shot by police in March, and on Wednesday Elijah McClain, who died after being put in a chokehold and injected with ketamine in 2019.

"Tennis - people watch it all around the world," Osaka said. "Things that we think are common names are not common overseas.

"I just want people to have more knowledge. I feel like the platform I have right now is something I used to take for granted and I feel like I should be using it for something."

Kvitova & Kerber through but other seeds tumble

Two-time Grand Slam champion Kvitova came back from a break down in the first set and saved a set point to beat Ukrainian Kateryna Kozlova 7-6 (7-3) 6-2.