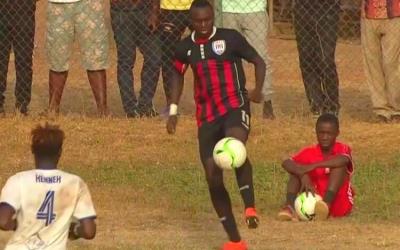 Inter Allies Adebayor was the talk of town on Saturday after putting up a scintillating performance in their 3-1 away win over Berekum Chelsea.Â Â

The Nigerien scored a brace as they returned from Berekum with the maximum points. The goals leapfrogged him to the summit of the top scorers' chart.

The Capelli Boys forward has earned rave reviews this season after managing 10 goals and 4 assists from 10 appearances.

â€ªVictorien Adebayor was named the NASCO man of the match, his 5th of the season.â€¬

Speaking to Asempa FM on Monday, February 17, Yahaya Mohammed affectionately called the 'Terminator', lauded praise on Adebayor and said his heroics push him to do better.

Yahaya on Sunday in the Ghana Premier League matchday 10 against Liberty Professionals scored a brace as both strikers are now joint-top scorers with 10 goals.

"He is a super player. To be honest with you he gave me a sleepless night on Saturday because I was leading him and he overtook me by two-goal margin and I had to do better,â€Â

â€œBeating Chelsea 3:1 at home is a huge result for Inter Allies,â€Â

This the spotlight was on @InterAlliesFC forward Victorien Adebayor. Then he goes to Berekum Chelsea to play a blinder and top it off with a brace. Brilliant. #GPLXpress pic.twitter.com/UOY2LSLsp6