World Cup 2022: Players and managers are not politicians - Klopp 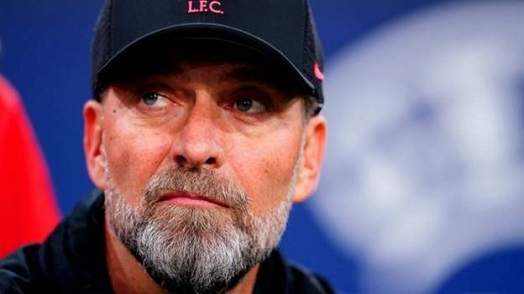 Liverpool manager Jurgen Klopp has said players and managers are not politicians, amid continued scrutiny over the World Cup 2022.

Host Qatar has been criticised for its stance on same-sex relationships, its human rights record and its treatment of migrant workers.

Klopp also says the decision to play the finals there "was just not right".

"Don't put Gareth Southgate constantly in a situation where he has to talk about everything," said Klopp.

Fifa has written to all 32 teams competing at the World Cup telling them to "now focus on the football".

Klopp has added that now he feels it is time to "let them just play the games - the players and the managers".

"[Southgate] is the manager of England, let him do it, and if you want to write something else about it, then do it," said Klopp.

"But [something] by yourself and not asking us [and writing] 'Klopp said' and 'Southgate said', and all this kind of stuff as if it would change anything."

'Journalists should have done more'

In 2010, Qatar clinched the rights to the World Cup after winning a ballot of Fifa's 22 executive members.

Qatar was accused of paying Fifa officials £3m ($3.7m) in bribes to secure their backing, but was cleared after a two-year investigation.

At the time, Fifa's then-chairman, Sepp Blatter, supported Qatar's bid, but has since said the organisation may have made the wrong decision.

For the first time, the World Cup is not being held in the summer because of the temperatures in Qatar at that time of year, and six of the eight stadiums being used had to be built.

Asked if football people made the decision for Qatar to win the bid, Klopp replied: "Football people? No, they were football politicians. You mean the Brazilian guy [Ricardo Teixeira]?

"Journalists should have done more. Do you really think we did enough in the first place? You are now making a story when it has happened, coming out of the corner and getting the players under pressure with questions.

"If Harry Kane says he will wear [the armband], the other guys say 'please don't make political statements'. It's not OK.

"This was organised by other people, and I don't say you let it happen but we all let it happen. Everything was on the table.

"There are wonderful people there as well and it is not that everything is bad, but how it happened was just not right in the first place," Klopp added.

"It was already clear what would happen and now it is 'oh yeah, it is difficult to build a stadium in Qatar because we have to do it in their summer as well and it is 50 degrees'. That's not good for humans to be outside and do hard, physical work.

"There were plenty of chances afterwards to say, 'by the way, the process is not right'. A lot of people took money for the wrong reasons. Nothing changed. How can that happen?"

England's Harry Kane and nine other captains of European teams will be wearing 'One Love' armbands, to promote diversity and inclusion, and as a message against discrimination.

The England team has now been asked to consider making a "display or gesture of solidarity with Iranian women fighting for their civil liberties" when the two countries meet in their opening match at the World Cup on 21 November.

Klopp added that "it's a tournament and players go there and do their best for their countries".

"I watch it from a football point of view and I don't like the fact that the players, from time to time, get in a situation where they have to send a message," he said.

"You are all journalists, you should have sent a message and you didn't write the most critical article about it.

"It is all not OK for the players, I really have to say. But it is here and we all let it happen.

"I will watch games, of course, but it is different to other World Cups."

A spokesperson for Qatar's Supreme Committee for Delivery & Legacy (SC) said: "We commend footballers using their platforms to raise awareness for important matters.

"We have committed every effort to ensuring that this World Cup has had a transformative impact on improving lives, especially for those involved in constructing the competition and non-competition venues we're responsible for."

Qatari World Cup officials have also stressed that "everyone is welcome" to visit the country to watch the football, and said no-one will be discriminated against.

However, LGBT+ campaigners in England and Wales have criticised Fifa over its letter to the 32 competing nations in Qatar.

"The global football community has called upon Fifa for answers around these issues for almost 12 years."

They added Fifa had not "provided the real assurances on fan safety needed by those considering travelling to the World Cup".

"Let's be clear, talking about human rights is neither ideological nor political. It is simply asking for decency and the ability for people to be able to watch their teams without fear of abuse," they said.

"This appears to be an attempt to prevent competing nations from uplifting the voices of affected communities, such as migrant workers and the LGBT+ community, who have consistently said this is not a World Cup for all."