World Cup 2022: Revenge on the radar for the new Black Stars 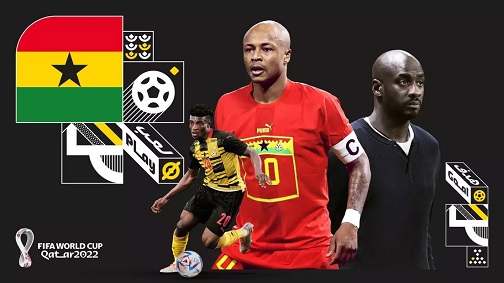 Ghanaian fans are celebrating again. After missing out on the FIFA World Cup in 2018, their team will be back on the biggest of stages at Qatar 2022 – even if they did take a tortuous route to get there.

After crashing out of the CAF Africa Cup of Nations at the group stage earlier this year, Ghana chose to get rid of coach Milovan Rejavac, replacing him with Otto Addo. The 47-year-old, who played for a number of years in the Bundesliga, including for Borussia Dortmund, took over the reins of a country for whom he had played 15 times and steered them to Qatar courtesy of an away-goals win over arch-rivals Nigeria in the African play-offs.

Ghana have been drawn in Group H along with Portugal, Korea Republic and Uruguay. The last of those three names will have caused more than a few Ghanaians to wince when it came out of the hat. At South Africa 2010, the Black Stars were eliminated in highly-dramatic fashion by Uruguay in the quarter-finals. Ghana therefore have a chance for revenge in what promises to be a tense showdown, particularly since they face one another in the third and final group game, when there could be plenty on the line.

Ghana are the surprise package in what is a very strong group. While their performances en route to the World Cup were up and down to say the least, the squad has an interesting mix of experienced and talented players capable of winning matches at this tournament. It will be up to Addo as coach to find the right blend and give the team the self-belief it needs to shake things up in Qatar.

Ghana barely squeezed through the second round of qualifying for the World Cup, and then had to face no less a challenge than Nigeria’s Super Eagles in March with a ticket to Qatar up for grabs. Addo had only taken over the coaching reins from Rajevac in the February, meaning that this was a real baptism of fire. He was already well acquainted with the squad from his role as assistant coach, but he only had a few weeks in which to prepare both himself and the team for the crucial matches against Nigeria. His task was not made any easier by the fact that he also had a number of absences to deal with in the squad.

Addo made five changes to the starting line-up that Rajevac had picked for his last match in charge. He promoted youngsters Mohammed Kudus and Felix Afena-Gyan to the starting XI for the first leg against Nigeria, and with the formation alternating between 4-3-3 and 4-2-3-1, the team looked particularly solid in defence. This had been a real problem for Ghana in the recent past, but here they kept a clean sheet in a goalless draw in Addo’s first match in charge. He then sent out the same XI for the second leg and his trust was rewarded with a battling performance in a 1-1 that saw them through to the World Cup on the away goals rule.

It has already become clear that Addo will not shy away from picking youngsters, with four members of the starting line-up against Nigeria under the age of 25 and two of them still teenagers. These young and hungry players will bring fresh impetus to the team and put pressure on the more established members of the squad as they look to go as far as they can in Qatar.

One of the most interesting and crucial players in Addo’s squad is Andre Ayew. With 107 international appearances to his name, the Ghana captain is closing in on Asamoah Gyan’s record of 109 caps. The son of the legendary Abedi Pele has also scored 23 international goals, putting him fifth for his country. In 2009, he was part of the team that won the U-20 crown at both continental and world level.

Facts and figures like these go some way to reflecting the importance of Ayew to the national team. Alongside his younger brother Jordan (81 appearances, 19 goals), himself a critical part of the squad, the 32-year-old will be looking to convert his many years of international experience up front into a haul of goals come the end of November.

Last season, he moved to Qatar to play for Al-Sadd, meaning that he will be well acclimatised to playing conditions as soon as the World Cup gets under way. He is very much Addo’s right-hand man and will play an important role in mentoring the younger squad members, after shining on the world stage as a youth player himself. Back at South Africa 2010, he came second in the voting behind Thomas Muller for the Best Young Player award.

One to watch: Mohammed Kudus

Kudus moved to the Dutch Eredivisie ahead of the 2020/21 season, joining Ajax and getting playing time in the UEFA Champions League and the UEFA Europa League. This year, he has been particularly impressive in the Champions League, scoring in all three of his team’s matches thus far, against Rangers, Liverpool and Napoli. He got an assist as well as a goal against the Glasgow club, which saw him voted as player of the match and named in the Champions League team of the week. He also has four goals in eight Eredivisie games this season.

The 22-year-old attacking midfielder has scored five times in 16 international appearances to date, and established himself as one of the first names on the team-sheet as far as Addo is concerned. He regularly took on leadership roles as a youth player and has the potential to be one of the stand-out players at Qatar 2022. Not for nothing is he regularly cited as one of the most talented players born in 2000.

Ghana’s fans had to wait until 2006 for their team to play in a World Cup for the first time. With John Mensah, Stephen Appiah and Asamoah Gyan in their ranks, the Black Stars made it all the way to the Round of 16 in Germany before losing to Brazil. At South Africa 2010, Ghana went one better before falling to Uruguay in the quarter-finals.

At Brazil 2014, Ghana came unstuck in what was a very tough group, but they could hold their heads up high as they were the only team not to lose against eventual champions Germany. In Russia 2018 qualifying, the Black Stars failed to make it past Egypt and had to watch the tournament from home.