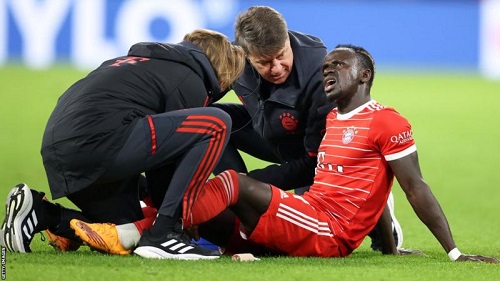 Sadio Mane will miss Senegal's "first games" at the World Cup because of a leg injury, an official from the country's football federation has said.

The Bayern Munich forward was named in the Teranga Lions squad for Qatar despite being forced off in a club game last week.

The German champions said the 30-year-old had an injury "to his right fibula", but Senegal coach Aliou Cisse said Mane would not need an operation.

The West Africans begin their Group A campaign against the Netherlands on Monday, with games against hosts Qatar (25 November) and Ecuador (29 November) to follow.

"We will have to rely on playing the first games without Sadio and win without Sadio," Senegal football federation (FSF) board member Abdoulaye Sow told AP.

"No one would have wanted it, but that's what's happened to us."

Sow added Senegal should "not whine too much" about the absence of the two-time African Footballer of the Year.

Mane is Senegal's star player and talisman, having scored the winning penalty when the Teranga Lions became continental champions for the first time in February, defeating Egypt in a shoot-out in the Africa Cup of Nations final.

Less than two months later, Mane repeated the feat, netting the decisive spot-kick as Senegal beat Egypt - in a clash that again pitted him against then Liverpool team-mate Mohammed Salah - on penalties in a crunch play-off to qualify for Qatar.