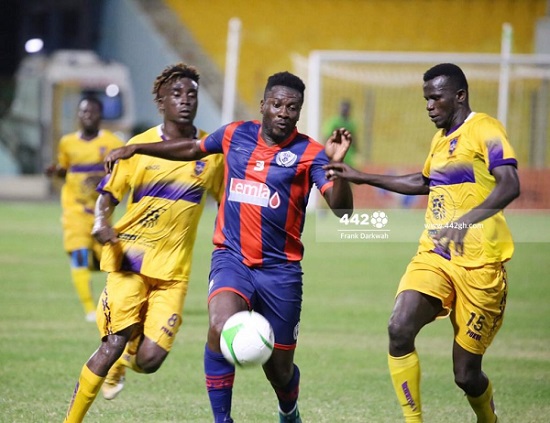 Asante Kotoko and AshantiGold were not in action on Match Day Three due to their involvement in the 2020/21 CAF inter Club competitions.

The Porcupine Warriors travelled to Mauritania to face Nouadhibou FC in the Champions League while Ashanti Gold engaged Burkina Faso side Salitas FC in the CAF Confederation Cup. Here is how things unfolded across Premier League centres on Match Day Three.

Cape Coast Mysterious Ebusua Dwarfs on Sunday, recorded their first win of the season after a slim win against Berekum Chelsea at Cape Coast Stadium.Â

Dwarfs captain Dennis Korsah scored the only goal of the game in the first to hand his side a hard-earned win.

Ebusua Dwarfs began the game the brighter of the two sides and nearly fetched an opener in the early minutes of the game.

But the wait didn't last long as captain Dennis Korsah broke the deadlock in the 21st minute.

Berekum Chelsea returned from the break in search of the equalizer, but it was difficult to unlock the Dwarfs defence.

Meanwhile, the home-side were comfortable with the slim lead, ready to pounce at any given opportunity to attack. Despite the waves of attack from Chelsea in the final minutes of the game, the Cape Coast side worked hard to end the game with the win.

Dwarfs will next travel to Accra to face Great Olympics with Berekum Chelsea hosting Liberty Professionals at the Golden City Park.

Karela United FC came from a goal down to beat Dreams FC 2-1 at the Crosby Awuah Memorial Park on Sunday.

Karela who started the campaign with an away draw against draw against Ashanti Gold remain unbeaten in the League after three round of games as delivering a 1-0 win against Inter Allies on Match Day Two.

Joseph Esso scored to give Dreams FC an early lead in the 36th minute. His second goal of the season after scoring last weekend in the 2-1 win against Medeama SC.

But the lead lasted for three minutes as Franklyn Osei levelled with a sumptuous freekick to level things up for the host.

The midfielder again scored on 65 minutes to give Karela United the lead and eventually held on to secure the win.

The win means Karela are now top of the league with seven points.

West African Football Academy on Sunday fought back to draw 1-1 with Elmina Sharks at the Red Bull arena at Sogakope.

The Academy boys who beat King Faisal 4-3 on the opening weekend of the season were desperate for the three points following a disappointing one nil loss to Bechem United on Match Day Two.

Elmina Sharks drew the first blood through Justice Mensah. His long-range drive deflected off a WAFA player before zooming into the net, beating goalkeeper Ferdinand Sabi Acquah in post for the Sogakope lads. Mensahâ€™s 41stÂ minute strike unsettled the host as they kept on losing possession to the visitors.

They finally made amends in the second half as Daniel Agbloe ball hit the bar line before cutting it back for Augustine Boakye to connect home beautifully to make it 1-1 in the 51stÂ minute.

WAFA then took the game to their opponents after fetching the equalizer but Yaw Acheampongâ€™s side stood firm to avoid an upset.

The introduction Eric Asamany and Michael Dwamena did them a lot of good as they brought in bite in the attacking third. The draw means WAFA are still without a win since the opening day victory against King Faisal.

The Ogya lads played without the spirited Yahaya Mohammed who picked up a shoulder injury against King Faisal last weekend. The game was evenly spread as the away side showed no sign of fear playing at the dreaded Dormaa park.

The fought gallantly by making life difficult for Coach Paa Kwasi Fabinâ€™s side. The result leaves Bechem United on 5 points while Aduana Stars move to two points with a game in hand.

Striker Kwame Karikari for the second time running scored for Liberty Professionals but the goal wasnâ€™t enough to hand them three points as they were held 1-1 at home by Techiman Eleven Wonders on Match Day Three of the 2020/21 Ghana Premier League.

The visitors took a 43rd minute lead at the Carl Reindorf Park before the Scientific Soccer lads restored parity a minute later through Kwame Karikari.

Back from recess, the away team looked more comfortable with some brilliant inter positional play as the like of Tetteh Nortey, Salifu Ibrahim, Salifu Mugeese, and Felix Akorlor continued to pile pressure on the defence of Liberty Professionals.

Ahmed Satar nearly got a late winner for Liberty Professionals with his free-kick, but his effort was saved by the Wonders goalkeeper.

The result means that, Liberty Professionals remain winless after picking just three points from their opening three games of the season. While Eleven Wonders have recorded a win and two draws so far.

Legon Cities FC and Medeama SC are still without a win after both teams settled for pulsating 0-0 draw at the Accra Sports Stadium on Friday.

Medeama coach Samuel Boadu made two changes to the team that lost 2-1 at Dreams FC, playing Ali Ouattara and Rashid Nortey in place of Ibrahim Yaro and Michael Yeboah.

Legon Cities stand in coach Wahid Mohammed handed a debut to former Ghana captain Asamoah Gyan. Gyan was introduced in the 70thÂ minute of the game and he showcased traits of his old self.

For Medeama SC Justice Blay partnered Rashid Nortey and Eric Kwakwa in midfield but was not enough as the two teams shared the spoils.

It was interesting to see Jonah Attuquaye display some sleek football against the Tarkwa lads.

The two teams are still without a win in the three-week-old Ghana Premier League.

A world class strike from Richmond Lamptey in the 61stÂ minute was all they needed to seal the points against the Phobians.