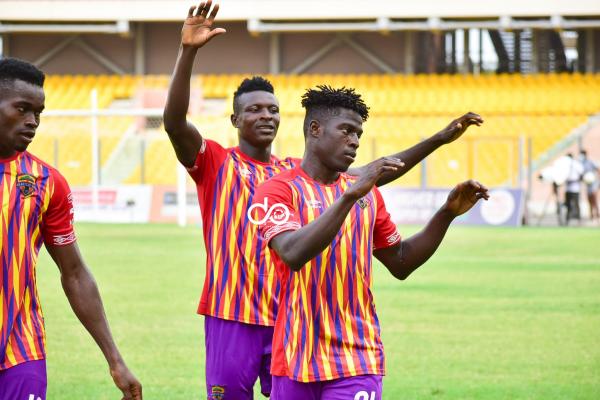 Hearts of Oak left it late to beat Ebusua Dwarfs 3-2 in their first game following the departure of head coach Kosta Papic.

Hearts got off to a dream start with Victor Aidoo grabbing a quick brace with two penalties in the 7th and 19th minute before Moro Sumaila halved the deficit just before half time.

Dennis Akorsah-Akoumah then scored a 77th minute to level the game for Dwarfs and set up a pulsating end to the match.

In injury time, substitute Isaac Mensah popped up with the winner, stumping home the rebound after Umar Manaf’s effort was initially parried by the Dwarfs goalkeeper.

The win is Hearts of Oak’s first in five games and moves them to 9th on the league log while Dwarfs slip down to 12th.

Berekum Chelsea applied the breaks on Dreams FC’s unbeaten run in the Ghana Premier League with a narrow 1-0 win over the Dawu-based club at the Berekum Golden City Park.

Paul Atta Agyei scored the only goal of the game to hand Vladislav Viric’s and his men their first defeat in 2021, having previously gone on a run of 8 games without a defeat.

In Elmina, Ahmed Toure scored a wonderful brace to power Medeama to an impressive 2-1 win over Elmina Sharks.

The former Asante Kotoko striker Toure, who rejoined Medeama on a free transfer last month, opened his account with a 3rd minute strike before adding a fabulous freekick 5 minutes from time to secure the win after Benjamin Boateng had levelled for Sharks.

Elsewhere, Hans Kwofie also struck on his debut for Legon Cities to secure a point for Bashir Hayford’s men away to Bechem United.

Moro Salifu scored for Bechem United on the stroke of half time before Kwofie’s equalizer just over the hour mark.

Karela United stretched their lead at the top of the table to 4 points with a 2-0 win over visiting Liberty Professionals.

Umar Bashiru’s first half strike set Karela on their way before Kwame Boateng’s injury time goal sealed the victory for the Aiyinase based side.

Inter Allies finally got a win after 8 games, with a 1-0 win over WAFA on Saturday. Nafui Suleman grabbed the only goal of the game, his second in successive games, to give Allies all three points.

On Friday, Ashantigold returned to winning ways and piled more misery on Aduana Stars with a thumping 4-0 victory in Obuasi.

David Abagna Sandan’s second half brace added to goals from Frank Akoto and Yaw Arnor to complete the humiliation of Paa Kwesi Fabin’s men, who have now conceded 8 goals in their last two games alone.

For the Miners, the victory was welcome relief for everyone at Aboakese, having gone the previous six games without a win. 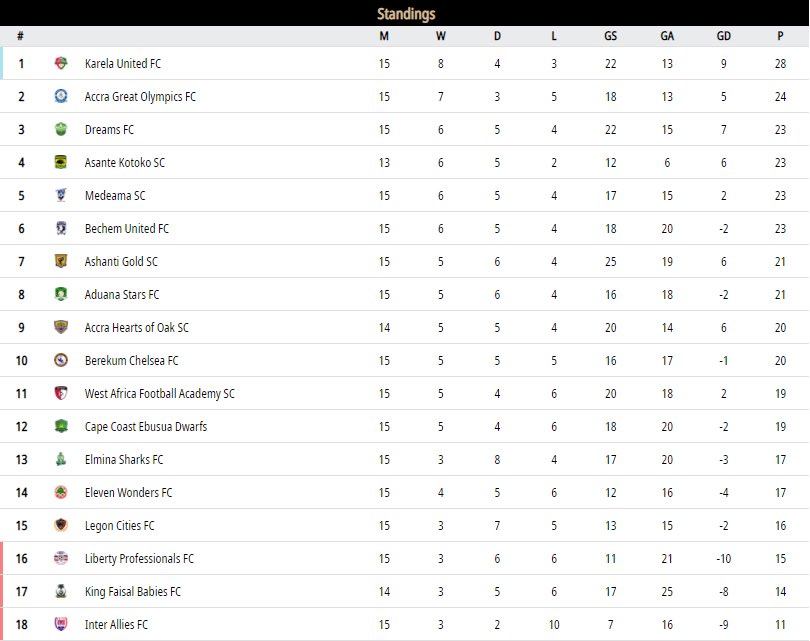