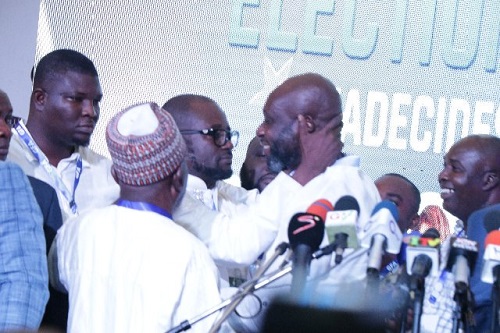 Kurt Okraku on earned enough votes to become the 24th President of Ghana football following an election held at the College of Physicians and Surgeons.

Despite not being able to fulfil his ambition to succeed Kwesi Nyantakyi, Geroge Afriyie has congratulated Kurt for doing so and has acknowledged delegates for choosing a leader for Ghana football.

"On a historic day for Ghana football such as this, I congratulate @kurtokraku on becoming our leader. Your success is the nation's collective success.

Thank you to all delegates who took part in the process.

READ ALSO: VIDEO: "It is time for us to work" - Kurt Okraku tells football people

READ ALSO: All you need to know about new GFA President Kurt Okraku