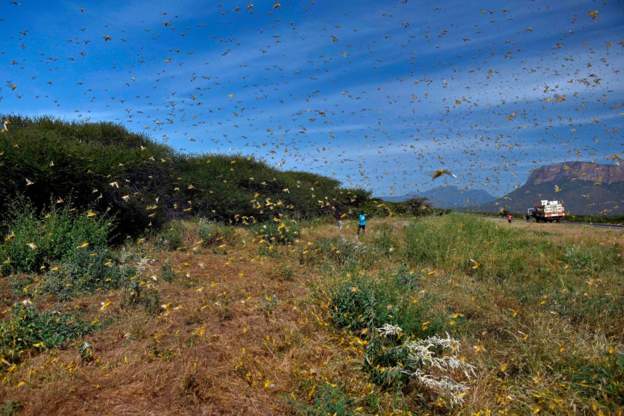 The locusts are threatening livelihoods in East Africa
Shares

The Bill and Melinda Gates Foundation has donated $10m (Â£7.7m) to help fight locusts in the East African region.

The contribution will be given to the UN's Food and Agriculture Organization (FAO), which appealed for funds to fight the locust invasion that is threatening food security.

FAO Director-General QU Dongyu has thanked the foundation for its donation and urged other philanthropists to help protect the livelihoods of farmers in the affected region.

The Bill and Melinda Gates Foundation is the charity established by the founder of Microsoft.

The UN has so far raised $33m, which includes the foundation's donation, but says $138m is needed in total to help fight the locusts.

The locusts are a huge threat to food security as a small swarm covering one sq km can eat the same amount of food in one day as 35,000 people, according to the FAO.

The locusts reproduce rapidly under the right weather conditions and could multiply 500 times in the next six months.