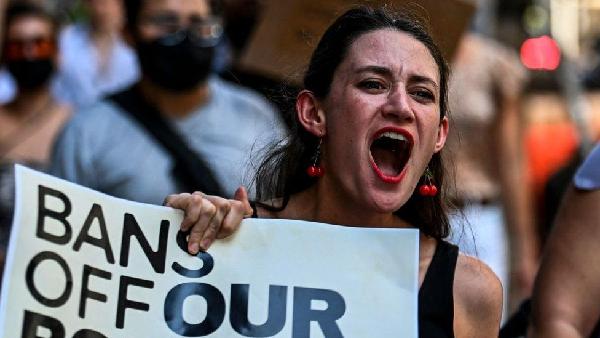 A Louisiana judge has blocked the state's abortion "trigger law" banning the procedure at any stage of pregnancy.

The controversial law, which was passed in 2006, makes no exceptions in cases of rape or incest.

The decision comes days after a landmark ruling from the US Supreme Court overturned the constitutional right to abortion.

Access to the procedure is now up to individual states.

Louisiana is one of 13 states that has reinstated bans or strict limits following the high court ruling.

These so-called "trigger laws" can come into immediate or near-immediate effect following the Supreme Court's reversal of Roe v Wade last week, but many now face fresh legal challenges at the state level. A judge has also temporarily blocked a trigger law from coming into effect in the state of Utah.

A lawsuit filed Monday morning by the Center for Reproductive Rights on behalf of local abortion providers argued that trigger bans "lack constitutionally required safeguards to prevent arbitrary enforcement" and are "void for vagueness".

Last week, the state's Democratic Governor, John Bel Edwards, said that while he is "unabashedly pro-life and opposed to abortion", he understands that not everyone - including Republicans - agrees.

Similar lawsuits have been filed in Utah and Ohio to stop trigger bans from coming into effect.

In Utah, a judge on Monday granted a restraining order that would block the state's trigger law for 14 days following a request for a temporary injunction from pro-choice group Planned Parenthood and the American Civil Liberties Union. Another court date has been set for 11 July.

Meanwhile, in Florida, a judge on Monday was weighing a request from a coalition of abortion rights groups and clinics over whether to block a law banning abortions after 15 weeks in that state.

Florida, the third most populous state in the US, had for over 40 years protected abortion rights in their state constitution through a privacy amendment.

In the lawsuit, the plaintiffs argued that the state's residents believe "that abortion is a fundamental right deserving of the strongest protection against government intrusion".

The 15-week law - which was modelled after the Mississippi law at the centre of the Supreme Court's recent decision - represented a "brazen attempt to override the will of the Florida people," the lawsuit said.

Abortion remains a highly divisive issue across the country. A recent Pew survey found that 61% of adults believe abortion all of most of the time, compared to 37% who say it should be illegal.