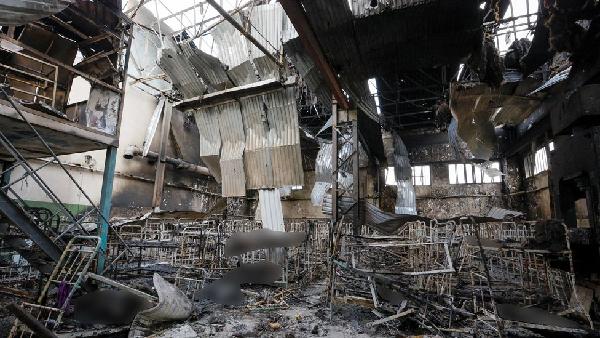 Russia and Ukraine have blamed each other for a rocket attack that killed dozens of Ukrainian prisoners of war in the occupied part of Donetsk region.

Ukraine says the prison was targeted by Russia in an effort to destroy evidence of torture and killing.

For its part, Russia said the prison camp in Olenivka was hit by Ukrainian precision rockets.

An adviser to President Volodymyr Zelensky said the scene looked like arson, and that a missile strike would have scattered the bodies.

Those detained are said to have included members of the Azov battalion, who were the last defenders of Mariupol and whom Russia has sought to depict as neo-Nazis and war criminals.

Ukraine's new Prosecutor-General Andriy Kostin said he had opened a war crimes investigation into the blast. His office added that it believed about 40 people were killed in the strike and 130 were injured.

Daniil Bezsonov, a spokesperson for the Russian-backed separatist Donetsk People's Republic, said the strike had been a "direct hit on a barracks holding prisoners" and the number killed might increase.

Russia's defence ministry said the strike had been carried out with US-made Himars artillery and it accused Ukraine of a "deliberately perpetrated" provocation. The ministry produced fragments of what it said were rockets fired by the Himars system.

The ministry's spokesperson, Lt Gen Igor Konashenkov, said eight prison staff were also injured in the blast, although the Russian-backed proxy authority ombudswoman said none had been affected.