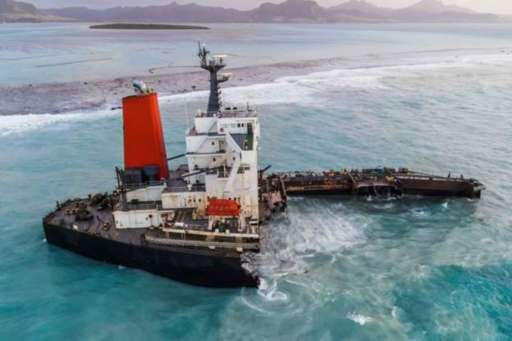 The captain of a Japanese ship that ran aground in Mauritius in July last year, spilling tonnes of fuel, has told an inquiry that he steered the vessel close to the island nation to look for internet connection.

"There was no internet on the ship and I agreed to dock in Mauritius so that the crew members could communicate with their relatives as it helps keep the morale of the crew high,” said Capt Sunil Kumar Nandeshwar.

MV Wakashio was carrying 4,000 tonnes of fuel when it hit a coral reef, causing an ecological emergency off the coast of the east African island nation.

Capt Nandeshwar, who was arrested along with his assistant, said he had sailed at least 15 times in Mauritian waters, often steering the ship within 30 nautical miles off the coast.

But last July he came within five nautical miles off the coast.

Mauritius government officials and MV Wakashio crew members have told the inquiry that the captain was to blame for the accident.

Testimonies given so far to the panel - which is led by former Judge Abdurraffeek Hamuth - say that there was a birthday celebration onboard.