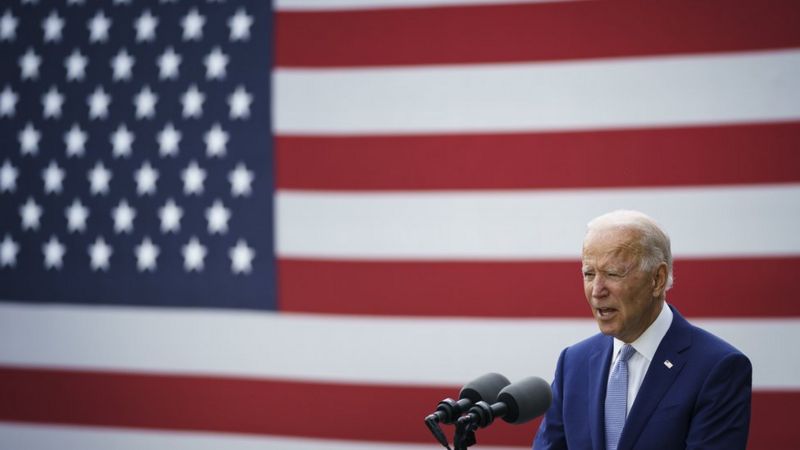 Joe Biden, who campaigned in Georgia in October, is the first Democratic presidential candidate to win the state since 1992
Shares

US President-elect Joe Biden has won the state of Georgia, the BBC projects, the first Democratic candidate to do so since 1992.

The win solidifies Mr Biden's victory, giving him a total of 306 votes in the electoral college, the system the US uses to choose its president.

Mr Trump, who has not yet conceded, alluded for the first time to a possible new administration in January.

Looking subdued, the president stopped short of acknowledging his defeat during a briefing of his coronavirus task force at the White House, his first public appearance since his election defeat was projected by US media.

As the country faces growing outbreaks of Covid-19, Mr Trump said he would not impose a lockdown to fight the virus, adding: "Whatever happens in the future, who knows which administration it will be. I guess time will tell."

The president, who did not mention Mr Biden by name, did not take questions from reporters. Pressure is growing on Mr Trump, a Republican, to acknowledge Mr Biden's victory and help prepare the transition from one administration to another.

The results in Georgia and North Carolina were the last to be projected in the race for the White House. Mr Biden's electoral votes equal the tally Mr Trump achieved in his victory over Hillary Clinton in 2016. At the time Mr Trump referred to it as "a landslide".

President Trump has launched a flurry of legal challenges in key states and levelled unsubstantiated allegations of widespread electoral fraud. But his efforts suffered three setbacks on Friday:

In Arizona, his team dropped a lawsuit seeking a review of ballots cast on Election Day after it became clear his rival's lead was unassailable. The challenge was based on a claim that some legal votes had been rejected
In Michigan, a judge rejected a request by two Republican poll watchers - who had alleged fraud in Wayne County - to block the certification of election results in Detroit
In Philadelphia, Pennsylvania, the Trump campaign's requests to invalidate several batches of mail-in ballots were rejected
A manual recount is to be carried out in Georgia because of the narrow margin between the two candidates, but the Biden team said they did not expect it to change the results there.