US midterms: Trump and Biden fire up voters as election looms 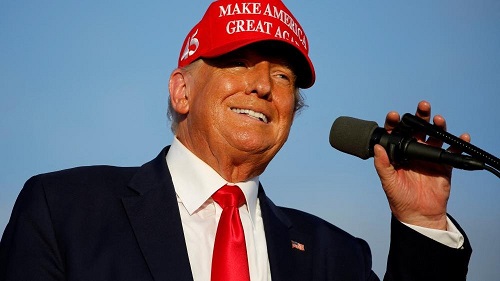 Mr Biden and Mr Trump made their last-minute pleas to voters in New York and Florida respectively.

Momentum has shifted recently towards Republicans, who are trying to wrestle both chambers from Democratic control.

They are favourites to win control of the House of Representatives but the Senate is a toss-up, polling suggests.

With the campaign in its final day on Monday, his party is braced for losses even in parts of the country where Democrats usually do well.

He spoke at a rally in New York on Sunday to support Governor Kathy Hochul, who is fending off an unexpectedly stiff challenge from Trump-backed Republican candidate Lee Zeldin.

In his speech, Mr Biden called the election "an inflection point" that will determine the next 20 years. He told voters at Sarah Lawrence College that they are choosing between two "fundamentally different visions of America".

Meanwhile his predecessor in the White House, Mr Trump, was in Miami where he spoke for over an hour, hammering Democrats for leading the country towards "communism".

"To every Hispanic American in Florida and across the land, we welcome you with open open open arms to our [Republican] party," he continued.

Mr Trump also continued to hint that he may run for president again in 2024, telling voters to "stay tuned" for his rally on Monday in Ohio.

Polls suggest that Democrats are likely to lose their majority in the House of Representatives.

Control of the Senate will probably rely on the results of extremely tight races in Pennsylvania, Georgia and Nevada.