US releases first images of IS leader raid 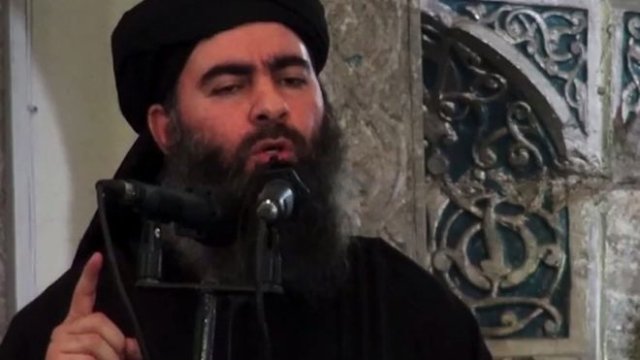 The US military has published the first footage of the raid in northern Syria that resulted in the death of the leader of the Islamic State (IS) group.

Grainy video showed troops firing at militants on the ground as they flew towards the compound where Abu Bakr al-Baghdadi was hiding before they moved in on the ground.

Baghdadi fled into a tunnel and killed himself by detonating a suicide vest.

After the raid the compound was destroyed with munitions.

The head of US Central Command, Gen Kenneth McKenzie, said the destroyed buildings were left looking like "a parking lot with large potholes".

Gen McKenzie said two children had died with Baghdadi in the tunnel - not three as previously reported.

He also could not confirm President Donald Trump's graphic description of Baghdadi whimpering and crying as he died.

"He crawled into a hole with two small children and blew himself up while his people stayed on the ground. You can deduce what kind of person it is based on that activity," he told a news conference at the Pentagon.

"That would be my empirical observation of what he did. I'm not able to confirm anything else about his last seconds. I just can't confirm that one way or another."

Gen McKenzie said four women - who were wearing suicide vests - and one man were killed at the compound.

Security correspondent Frank Gardner: "He has symbolised the leadership of so-called Islamic State"

He said an unknown number of fighters also died after opening fire on US helicopters.

He added: "I want to make it clear that despite the high-pressure and high-profile nature of this assault that every effort was made to avoid civilian casualties and to protect children we suspected would be in the compound."

Gen McKenzie confirmed that the IS leader had been identified through his DNA - adding that samples had been on file since Baghdadi's detention in an Iraqi prison in 2004.

He said Baghdadi's remains were flown back to a staging base for identification and were then buried at sea within 24 hours of his death "in accordance with the laws of armed conflict".

Gen McKenzie also said that the US military expected IS to stage some kind of revenge attack for the death of its leader.

"We suspect they will try some form of retribution attack. And we are postured and prepared for that," he said.