US restricts entry of 'anti-democratic Nigerians' 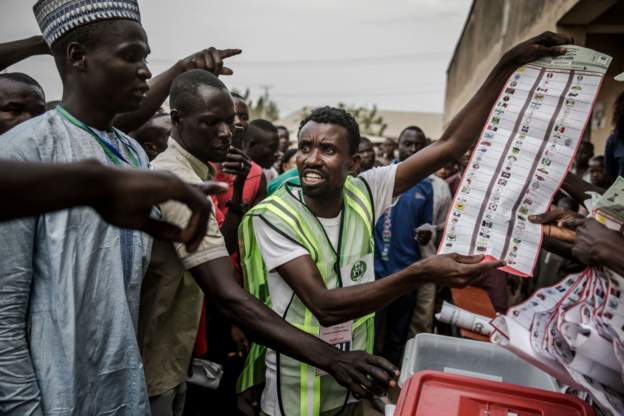 The United States has imposed visa restrictions on those Nigerians it says are "responsible for undermining the Nigerian democratic process".

In a statement, the State Department says the measures will also apply to those who have organised election-related violence.

It is unclear what criteria the US has used to determine who will be affected by the visa restrictions.

The names of those impacted by this announcement have not been made public but the US government stressed that the sanctions were specific to certain individuals, and "not directed at the Nigerian people or the newly elected government".

"These individuals have operated with impunity at the expense of the Nigerian people and undermined democratic principles and human rights," the statement says.

This is not the first time the US has raised concerns.

During a visit to Nigeria ahead of the 2015 elections, then-Secretary of State John Kerry, promised anyone involved in political violence in Nigeria would be denied a US visa. But the government failed to follow through on its threat.

A former adviser to the State Department told the BBC that the decision to impose visa restrictions this time around, may be a sign of the declining relationship between the administration of President Muhammadu Buhari and the US diplomatic mission in Nigeria.

Eight more people have succumbed to the novel coronavirus disease in Ghana,…