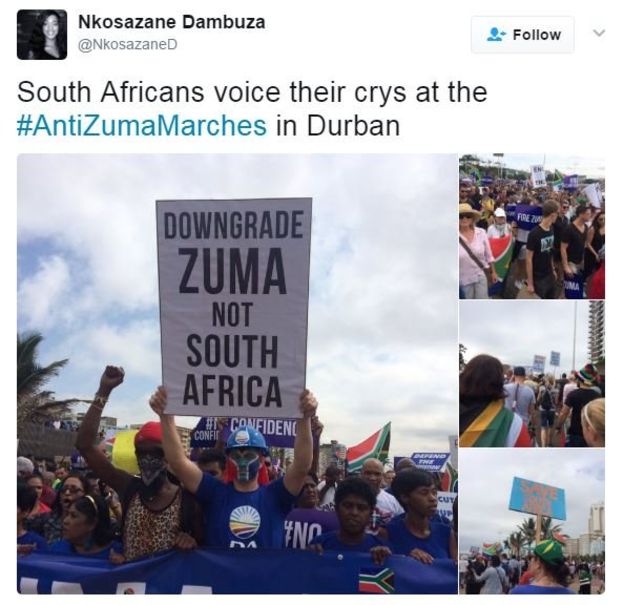 Protesters are gathering in major South African cities calling for President Jacob Zuma to step down after the sacking of a respected finance minister.

Crowds are building ahead of demonstrations in Johannesburg, Cape Town, Durban and the capital, Pretoria.
Mr Zuma's sacking of Finance Minister Pravin Gordhan led to the country's credit rating being cut to junk status.
The move has added pressure to South Africa's already embattled economy.

Thousands are expected to march and pictures shared on social media on Friday show large crowds assembling in Church Square in Pretoria, despite confusion over whether demonstrations in the capital are permitted by law.
Police said on Thursday that marches in Pretoria were illegal because they had not been granted permission by city authorities. But this was later overturned by a magistrate.

Protesters in the capital are planning to march to the seat of government, the Union Buildings.

In Johannesburg, where people are due to converge a short distance from the ANC headquarters, motorists have been advised to avoid the city's central business district.

The government, which has appealed for peace during the countrywide protests, tweeted that the laws in South Africa are also there to "protect the right of those who would not like to participate in protest action".
Earlier this week, a major decision-making body within the ruling ANC party discarded a complaint against Mr Zuma that he had failed to consult executives before reshuffling his cabinet.

The move to drop Mr Gordhan from office angered both Mr Zuma's opponents and allies, causing a rift in the ruling ANC party, which has governed South Africa since 1994.
It left some in the ANC leadership questioning whether Mr Zuma should remain as president.
Key ANC allies, the South African Communist Party (SACP) and the main trades union federation Cosatu, joined in the calls for him to go.
But the party's National Working Committee (NWC), discussing the cabinet reshuffle, later gave the president its backing.

Mr Zuma has been described in local media as the Teflon Don because of his survival skills following the acceptance of his explanation for his controversial sacking of the finance minister.
Opposition parties, together with some in his own governing alliance, planned Friday's mass action through public protests to demand his resignation.
The Economic Freedom Fighters went to court asking permission for his impeachment.