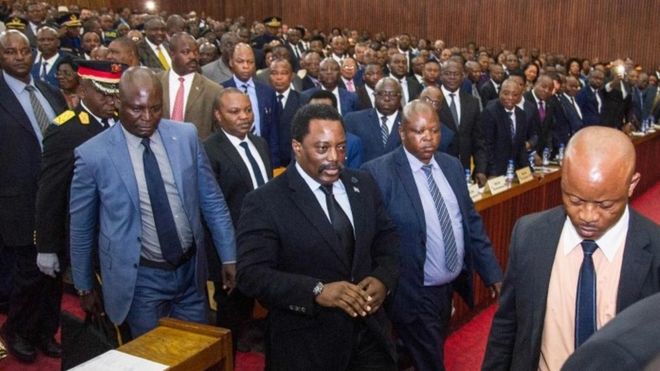 Democratic Republic of Congo President Joseph Kabila has appointed Bruno Tshibala as the new prime minister of the power-sharing government.

Mr Tshibala will be leader until presidential elections later this year.

He was expelled from Congo's largest opposition party, the UDPS, last month after contesting the designation of successors to veteran leader Etienne Tshisekedi who died in February.

Talks to negotiate his exit from power broke down last week.

Mr Kabila was supposed to step down after his second and final five-year term came to an end last year but the vote to replace him was not held.

The arrogance of power

The failure to organise the polls led to a wave of deadly demonstrations by opposition supporters, with calls from diplomats for the president to respect the constitution.

The Roman Catholic Church stepped in to broker a deal at the end of 2016 which outlined the creation of a transitional government that would oversee the elections.

But the deal collapsed because the government and the opposition were unable to agree on the power-sharing mechanism under the arrangement.

The country of 71 million people has not had a peaceful transfer of power since its independence from Belgium in 1960.